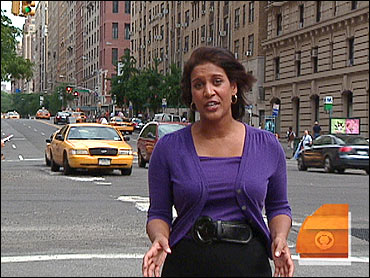 We all know that rising gas prices are forcing us to search for alternative fuels and more fuel efficient cars - but there are some other reasons to be optimistic about the high costs of fuel - here are just five of them.

High gas prices are causing pain across the country, but they're also forcing us to search for alternative fuels and more fuel efficient cars.

Not only that, points out CBS News correspondent Priya David -- they're prompting changes in our behavior that could prove positive, as well:

One of the benefits of high gas prices is that there is less traffic. Travel on all roads is down two percent already this year, with drivers switching to mass transit wherever they can.

Time magazine Senior Writer Amanda Ripley told David, "According to one estimate, 2,200 people have already been saved over the past year, because a reduction in driving has led to less particle pollution in the air."

People are conserving gas every way they can, David says, and that means they're driving less often and, when they do go out, they're driving more slowly, which is leading to safer roads.

"If gas prices stay at $4 a gallon for a year or more," says Ripley, "we can expect that about 1000 people a month will not die in car accidents, which is pretty remarkable, since car accidents are the leading cause of death for people from ages 5-to-34."

Yet another benefit -- we're seeing jobs that had moved overseas - return home. Companies in heavy industries, such as steel, are finding it cheaper to make their products in the United States, rather than ship their cargo around the world.

One more benefit, says Ripley: A lot of companies and organizations are going to four-day workweeks, and that's mostly because it costs them a lot of money to keep their buildings cool and running five days a week. ... So, the employees will generally work longer days ... during four days, and then get the fifth day off ... and they're so psyched to have this extra tie with their family."

Also, says David: One expert has figured out how much high gas prices will reduce obesity. When gas is pricey, people walk more, they bike more, and eat out less. So, this expert says a permanent $1 hike in prices could cut obesity by 10 percent, which would obviously save thousands of lives and billions of dollars in healthcare.
MMVIII, CBS Interactive Inc. All Rights Reserved