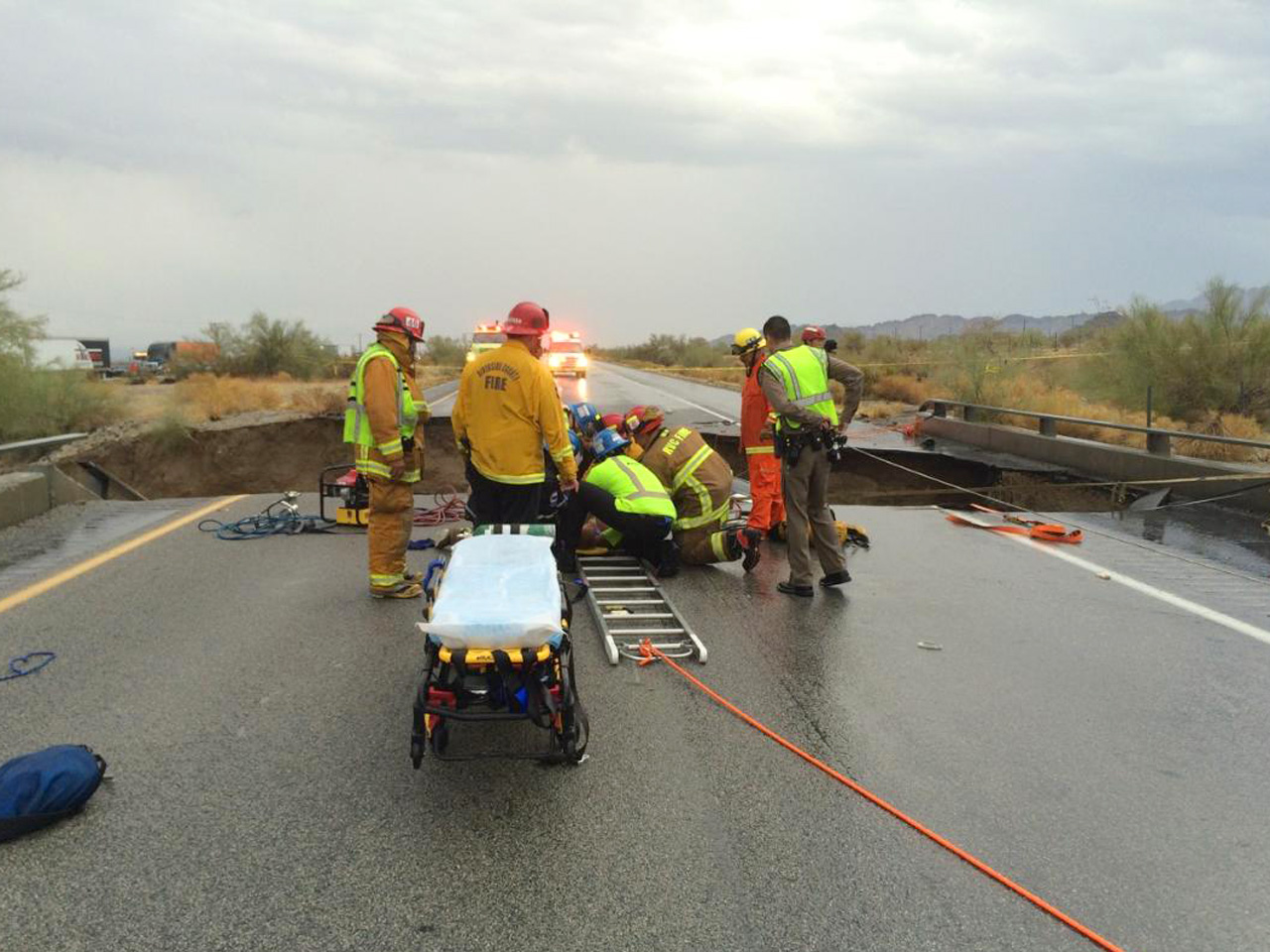 LOS ANGELES -- An elevated section of Interstate 10 collapsed Sunday amid heavy rains in the California desert, injuring one driver, stranding many others, and halting travel for thousands by cutting off both directions of a main corridor between Southern California and Arizona.

"Interstate 10 is closed completely and indefinitely," said Terri Kasinga, spokeswoman for the California Department of Transportation.

The collapse Sunday of Interstate 10 in southeastern California left one driver injured, stranded numerous motorists and complicated travel for countless others for what officials warned could be a long time.

A bridge for eastbound traffic about 15 feet above a normally dry wash about 50 miles west of the Arizona state line gave way and ended up in the floodwaters below, the California Highway Patrol said, blocking all traffic headed toward Arizona.

The westbound section of the freeway near the tiny town of Desert Center also closed. The roadway was intact but extremely undermined by flooding and could need rebuilding, Kasinga said.

No timeframe was given for when either direction would reopen, as crews were diverted from other projects to examine the site. "They won't even be able to begin assessing the damage until Monday," Kasinga said.

That means those seeking to travel between California and Arizona would be forced to detour hundreds of miles out of their way, to Interstate 8 to the south or Interstate 40 to the north.

Busy I-10 is the most direct route between Phoenix and parts of Southern California, including Los Angeles. Officials reported State Routes 177 and 78 also remain closed due to flooding.

Transportation officials recommended travelers on the east side of the collapse use U.S. Highway 95 in Arizona to get to the other freeways, and that in California drivers use state routes 86 and 111 to get to Interstate 8 into Arizona.

One driver had to be rescued from a pickup truck that crashed in the collapse and was taken to a hospital with moderate injuries, the Riverside County Fire Department said. A passenger from the truck was able to get out without help and wasn't hurt. The rescue took two hours, CBS Los Angeles says.

Hundreds of other cars were stranded immediately after the collapse, but the California Highway Patrol was working to divert them in the other direction off the freeway, and it wasn't clear if any remained, Kasinga said.

Pamala Browne, 53, and her daughter were driving from Flagstaff, Arizona to Palm Desert, California when they got stranded when the westbound lanes were shutdown.

"Oh my God, we are so stuck out here," Browne told the Desert Sun newspaper. "There's no end to the cars that are stuck out here."

The rains came amid a second day of showers and thunderstorms in southern and central California that were setting rainfall records in what is usually Southern California's driest month.

The city of Corona saw water and mud, rolling down its hills, following a massive vegetation fire that burned the area just days ago, reports CBS News correspondent John Blackstone.

Heavy rain meant the Corona Fire Department's swift water rescue crews were sent on patrol to get people out of harm's way. Firefighters used sandbags to protect homes. They believed clogged storm drains caused water and mud to flow through the neighborhood.

Rain fell Sunday afternoon in parts of Los Angeles County's mountains, the valley north and inland urban areas to the east. The city also was expected to get a late repeat of Saturday's scattered showers and occasional downpours as remnants of tropical storm Dolores brought warm, muggy conditions northward.

Nearly three dozen families at a Huntington Beach apartment complex were forced to evacuate their homes Sunday after the weather-related collapse of several ceilings, according to CBS Los Angeles.

Saturday's rainfall broke records in at least 11 locations, including five places that had the most rain ever recorded on any day in July, Sirard said.

July is typically the driest month of the year in Southern California. Because of that, Saturday's 0.36 inch of rain in downtown Los Angeles exceeded the 0.24 inch recorded July 14, 1886, which had been the wettest July day in nearly 130 years.

The record is especially significant, Sirard said, because downtown Los Angeles has the longest recording climate station, dating back to July 1, 1877.

Signs warned beachgoers to avoid storm drain flows into the ocean because of Saturday's sometimes heavy rain. The Los Angeles County Department of Public Health recommends people avoid swimming within 100 yards of a storm drain for 72 hours after heavy rain.

Meanwhile, the summer storm has helped firefighters advance on two wildfires that broke out Friday.

Muggy, moist conditions were expected to persist through Monday.