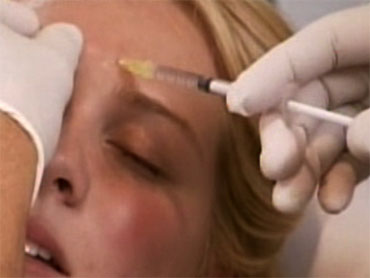 Wedding prep may never be the same. In the new E! reality show "Bridalplasty," brides-to-be compete against each other in various challenges, trying to win the big prize: plastic surgeries and the ultimate all-expense-paid wedding.

"Bridalplasty" host Shanna Moakler and the show's plastic surgeon, Dr. Terry Dubrow, discussed the show and the controversies surrounding it on "The Early Show" Thursday.

"Early Show" co-anchor Erica Hill remarked, "There's a lot of controversy surrounding this show. The Boston Herald wrote it might be the most depressing series ever to air on television. The L.A. Times says it preys on the insecurities of brides."

She asked Dubrow, "Are you at all concerned, as a surgeon, this could be sending the wrong message to women?"

Dubrow replied, "I've heard that criticism, but we are really not sending a message, but really just turning the camera on what's happening across the board in the United States."

Hill pressed, "There is no message at all?"

So what's the most common thing women have done before their big day?

Dubrow said, "Breast augmentation, Botox, rhinoplasty, they'll take a bump off their nose, they'll pin their ears back, those things that have always bothered you. You want to look your best on your wedding day."

Hill said, "But a lot of people do watch it, legitimately, and a lot of women look to this and weddings have become such a huge business, and they're such lot of focus for a lot of reality shows. A lot of women might work out or grow their hair out. But these women have wish lists of actual procedures. Was anything that surprised you? Because these are really attractive women."

Moakler said, "Some were really there for the wedding. They didn't really want the plastic surgery. While some of them were really there for the plastic surgery and they really had relatable stories. Some of them have lost their breasts to breast cancer and want implants for reasons like that. Some have been dieting and exercising. ... There are certain things diet and exercise, whether your genes, I've had three C-sections, the loose skin from such weight loss. You can't do anything besides plastic surgery to fix those kinds of things."

Dubrow said, "Plastic surgery isn't reserved for unattractive people. It's for anybody that have something bothering them, just as long as they have realistic goals and expectations."

Dubrow said he spoke with the contestants before the show began to consider their suitability for things they wanted to have done.

"(We) discussed the ricks and complications. These were sort of standard procedures," he said.

But what about the psychological risk of plastic surgery and doing the show?

Moakler said, "Whenever anyone does a reality show that's a big concern. One of the things about this show is it's not 'The Swan.' It's not like we were trying to Heidi Montag these girls. They really went in and the doctor was careful with them about…having realistic ideas of what they really wanted."
Hill said, "It is fascinating, I have to say."