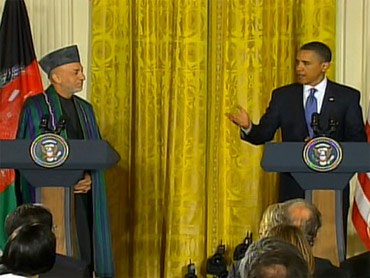 A bribery probe involving a top adviser to President Hamid Karzai has angered the Afghan leader and threatens to damage U.S. relations with Kabul just three months after a White House visit that seemed to smooth ties at a critical stage in the war.

Instead, tensions have risen over the aide's arrest by a U.S.-advised team, and the U.S. says it is watching the next anti-corruption steps closely.

In the days that followed, Karzai bluntly criticized U.S. war strategy and ordered private security companies in the nation to disband in four months. He also signed off on the forced retirement of a veteran corruption-fighter amid allegations by the ousted prosecutor and others that cases against high-ranking government officials were being blocked.

U.S. officials have been pressing Karzai to step up efforts to root out corruption, and he has pledged to do that. At the same time, he has pushed back, saying the international community needs to do more to eliminate corruption in its own procedures involving contractors and eliminate terrorist havens outside Afghanistan's borders.

Uncertainty about Karzai's commitment to combat graft and corruption comes as the last of 30,000 U.S. reinforcements arrived in Afghanistan. U.S. and NATO military officials are stressing the need to follow security gains on the battlefield with improvements in governance - and do it posthaste.

"What we are seeking to do is to encourage the development of good governance - that which serves the people rather than that which preys on the people," Gen. David Petraeus, the top commander of U.S. and NATO troops in Afghanistan, told The Associated Press and two other news organizations Tuesday.

The recent arrest of Mohammad Zia Salehi, the chief of administration for Afghanistan's National Security Council, may have stymied that goal.

Salehi, who has not been formally charged, was arrested in July for allegedly accepting a car in exchange for his help in thwarting another corruption case involving a company that handles huge money transfers worldwide.

Outraged by the arrest, Karzai intervened and ordered his release. Western law enforcement officials who advised on the case said investigators followed Afghan law in taking Salehi into custody for questioning. Karzai insisted that Salehi's civil rights were violated in the arrest that he described as reminiscent "of the Soviet Union, where people were taken away from their homes by armed people in the name of the state."

Karzai ordered a review of the conduct of Afghanistan's Major Crimes Task Force and Sensitive Investigative Unit, who were both involved in the arrest. The two units, which are mentored by U.S. and British law enforcement officials, investigate corruption allegations against high-level Afghan government officials and then feed cases to Afghan prosecutors.

In the past few days, Karzai signed a decree directing the Ministry of Justice and Karzai aide Nasrullah Stanekzai, who heads the legal advisory board for the palace, to outline the legal responsibilities and authorities of the two units. Stanekzai, who is also a law professor at Kabul University, said they were working on a draft.

Attorney General Mohammad Ishaq Aloko wrote a retirement letter for Faqiryar, saying the 72-year-old prosecutor had exceeded 40 years of government service allowed by law. Karzai accepted it and Faqiryar was out of a job.

State Department spokesman P.J. Crowley said U.S. officials were in touch with Afghan officials over Faqiryar's retirement, but would leave it to them to explain the decision.

"What he (Faqiryar) was doing was vitally important to fighting corruption in Afghanistan," Crowley said. "It is an area we are watching closely. We are concerned by recent pronouncements, recent actions by the Afghan government. The government has to demonstrate that it is living up to the commitments made by President Karzai and others that it is going to allow the institutions that are being built in Afghanistan, including the Major Crimes Task Force and the Special Investigative Unit, to be able to function free of political interference."

Faqiryar, who disputed the length of his government service, said he wanted to continue to work.

He told the AP that cases against three or four former Cabinet ministers had been completed but were put on hold and had not been sent to the courts. He said five provincial governors have been accused of corruption, with two of the cases sent to court and three remaining under investigation. Faqiryar also said several Afghan ambassadors to other nations had been accused of corruption.

Meanwhile, there has been no change in the Salehi case, according to Ahmad Beg Qadiry, who was named to replace Faqiryar. The attorney general's office sent letters to Salehi asking that he or his defense attorney submit to questioning, and "so far he has not appeared and there is no other development in that case," Qadiry said.

Petraeus said Karzai has stated publicly that corruption undermines the legitimacy of his government in the eyes of the Afghan people. The general said, however, that hundreds of judicial officials have been removed and numerous government and security officials have been fired or thrown in jail - most recently an Afghan brigadier general who commanded border forces in western Afghanistan.

"There are numerous other cases that are pending. Some of those have been reported on in the press," Petraeus said, adding that Karzai has promised President Barack Obama and Sen. John Kerry, chairman of the Senate Foreign Relations Committee, that he wants to bolster anti-corruption efforts.

"In the months ahead, obviously we look forward to seeing the actions that are taken," he said.

Larsen, a member of the House Armed Services Committee, said he entered a meeting with Karzai frustrated at the lack of progress in Afghanistan and left the hourlong session "disturbed."

Larsen said eliminating corruption is impossible but Karzai should do what he can to minimize it.

"I think the patience of the American people is almost done," he said.

In recent days, Karzai has hinted at his own indignation. In statements laced with nationalist rhetoric, he has said there is a "serious need" to alter strategy against extremists - that the fight is not in Afghan villages, but across the border in Pakistan.

"The experience of the last eight years showed that the fight in the villages of Afghanistan has been ineffective apart from causing civilian casualties," Karzai said in a statement Monday after meeting with German Parliament Speaker Norbert Lammert.

Afghan National Security Adviser Rangin Dadfar Spanta accused Pakistan of nurturing and mentoring militants while the U.S. continues to provide billions of dollars in aid and assistance. The Afghan people are no longer "ready to pay the price for the international community's miscalculation and naivete," he said in an op-ed published Aug. 23 in The Washington Post.