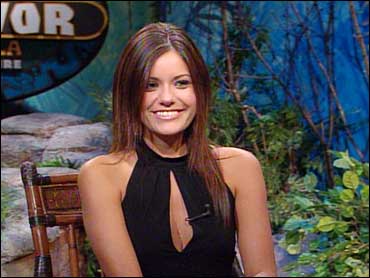 "I still don't know what a pick is," Brianna Varela says.

Even thought she listed basketball as her favorite sport to watch, she tells The Early Show co-anchor Rene Syler she doesn't know any of the terminology players use.

And that was only part of her problem in playing "Survivor: Guatemala." During the Mayan basketball game all she could do was hold on to a pole, while tribe mates Stephanie LaGrossa and Lydia Morales struggled in the net to hold and pass the ball.

"I couldn't move. Cindy (Hall), she looks small, but she is a beast. I mean she is a strong girl," Varela says. "It was so hot out there. If you had to run around in 114-degree weather, I think you'd be a little exhausted, too."

It was Stephanie who came up with a game strategy using the term "picks," but it sounded more like a Mayan word to her confused team players, Brianna and Lydia Morales.

"That challenge went on for two hours," Brianna says. "I really couldn't understand her."

Commenting on the game that led to losing the immunity idol, Stephanie was not a happy camper. She said, "After the first round, she is like this. Her head is completely up her butt. I have to pull it out. I'm like, dude, it's too early in the game."

Brianna says it's unfair to judge her on the basis of just one challenge.

"I know because of my poor performance...that was my downfall," Brianna says. "I don't really think that it was fair to vote me off based on one challenge. I have a lot more to offer than physicality."

But she had other problems, too. She didn't bond very well with other members of her tribe. "I knew Jamie (Newton) had it out for me the first day. I knew Lydia didn't like me," she says. And after that basketball game, Stephanie was not on her side either.

"Which was very surprising when I saw it aired last night," Brianna says. "Stephanie and I, I thought we had a pretty good relationship. But apparently she wasn't too fond of my skills. And I was gone. And you know what? She played the game. She fooled me. Kudos to her."

So what was the problem with Lydia?

"I tried to initiate a few conversations," she says.

To those who spoke poorly of her during the game, she says, "They have their opinion and that's fine, but it just shows their immaturity."

Now that she is out of the game, she is working as a bartender. And from the game, she says, she has learned "how to disregard stupid boys."

Ruby's Bridge From Child To Adult