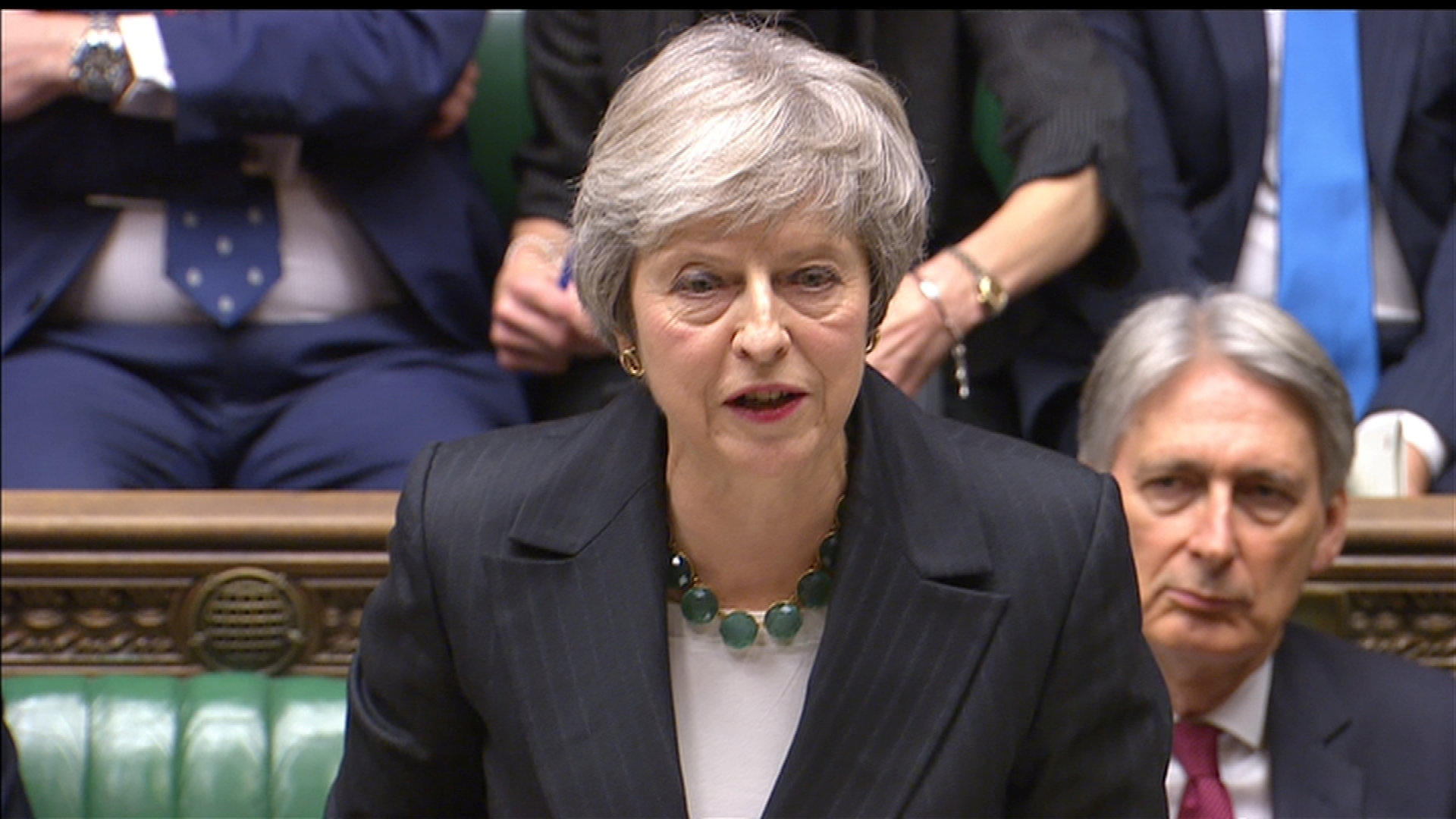 LONDON -- Prime Minister Theresa May reportedly decided on Monday to cancel a long-awaited parliamentary vote on the Brexit deal she struck with the European Union as she was heading for near-certain defeat. She was due to address parliament Monday and what happens next could open up a dizzying array of consequences that could increase volatility in global financial markets, especially for the British pound.

Failure to approve May's deal could suggest Britain is one step closer to dropping out of the EU in March with no deal, a worst case scenario that most economic commentators, including the Bank of England, say would lead to a savage recession.

But it could also lead to scenarios under which the country remains close to -- or even stays in -- the EU.

With Tuesday's vote expected to be canceled -- though it remained unclear how, procedurally, May's government might force a delay in the vote -- she could seek to draft a new version with the EU and submit it for a parliamentary vote.

Parliament could coalesce around another Brexit deal that would see Britain retain very close links to the European single market. There could even be a second referendum on Britain's exit from the EU.

"It is important to keep these scenarios in mind," says said Erik Nelson, currency strategist at Wells Fargo Bank, as the risk to markets from Brexit "perhaps becomes even more acute in the coming days and weeks."

Market reaction could guide the process

How markets react could itself influence the politics of Brexit by either striking fear of economic chaos in the hearts of British politicians or - in case of an immediate lack of volatility - encouraging them to take risks.

The prospect of financial Armageddon can be a big motivator for lawmakers. In October 2008, U.S. stock markets nosedived almost 10 percent in a day after Congress rejected a $700 billion financial bailout program, known as TARP. Days later, they approved it.

In Europe, Greece's government came to power in 2015 with a declared mission to scrap the country's bailout program and its tough economic measures. Fears that the country was going to have to ditch the euro currency almost led to a run on the banks, eventually leading the government to sign up to another onerous bailout.

Given the passions involved in the Brexit debate, it's unclear how anyone will respond to financial chaos.

The pound will likely be at the forefront of any market reaction. It is the main indicator for international confidence in the British economy, as opposed to the FTSE 100 stock index, which is full of multinationals that make their money around the world.

The pound took the biggest hit in June 2016, when the country voted to leave the EU. It slid 15-20 percent against other major currencies - an immediate cut to the wealth of the British that stoked inflation by raising the price of imports. There's concern that the pound could endure a similar drop if Britain crashes out of the EU without a deal. The Bank of England says it could fall toward 1-to-1 with the dollar. On Monday, it hit an 18-month low of $1.2628, down 0.8 percent on the day.

International markets could also be roiled if investors believe Britain will leave the EU without a deal. Among other things, such a scenario would see tariffs imposed on hundreds of billions of dollars in trade. Britain would drop out of Europe-wide agreements that govern area such as aviation and prescription drugs, threatening to ground flights and disrupt supplies of drugs. That would create huge uncertainties in a country and region that are home to many of the world's biggest multinationals.

The market reaction will likely depend on what May does next and how British politicians react. That will all give investors clues as to whether a "no-deal" Brexit becomes more or less likely. And that may not be become clear for days, and possibly not until the new year.

Hours before May's government made it clear she hoped to delay the vote on her doomed proposal, a top European Union court made it clear that it wasn't too late for Britain to change its mind, and that I could do so unilaterally.

The European Court of Justice ruled Monday that when an EU member country has notified its intent to leave, "that member state is free to revoke unilaterally that notification."

Britain voted in 2016 to leave the 28-nation bloc, and invoked Article 50 of the EU's Lisbon Treaty in March 2017, triggering a two-year exit process. Article 50 contains few details, in part because the idea of any country leaving was considered unlikely.

The Luxembourg-based ECJ said that given the absence of any exit provision in Article 50, countries are able to change their mind in line with their own constitutional arrangements and that such a move "reflects a sovereign decision."

The British government is free to do so as long as no withdrawal agreement has entered force.