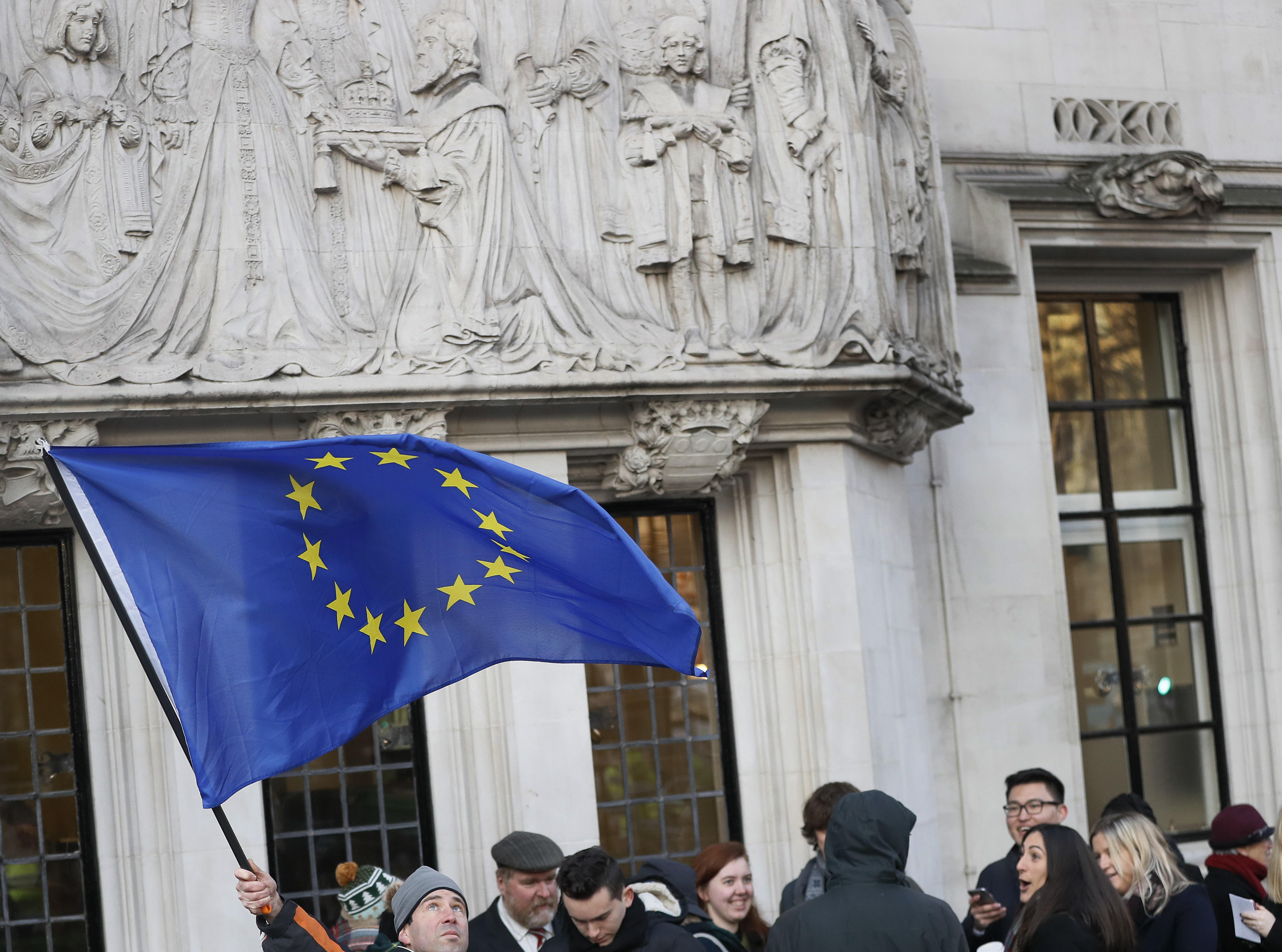 LONDON -- Britain’s Supreme Court began hearing a landmark case Monday that will decide who has the power to trigger the U.K.’s exit from the European Union - the government or Parliament.

The legal battle has major constitutional implications for the balance of power between the legislature and the executive, and has inflamed Britain’s already raw wound over how and whether to leave the EU.

The court’s most senior justice, David Neuberger, opened the four-day hearing by condemning the “threats of serious violence and unpleasant abuse” directed at Gina Miller, one of the claimants trying to ensure Parliament gets a say.

“Threatening and abusing people because they are exercising their fundamental right to go to court undermines the rule of law,” Neuberger said, banning publication of the addresses of Miller and other parties in the case.

Neuberger and 10 other justices at the country’s top court must decide whether Prime Minister Theresa May’s government can invoke Article 50 of the EU’s key treaty, the trigger for two years of divorce talks, without the approval of lawmakers.

May plans to trigger Article 50 by the end of March, using centuries-old government powers known as royal prerogative. The powers - traditionally held by the monarch but now used by politicians - enable decisions about joining or leaving international treaties to be made without a parliamentary vote.

Financial entrepreneur Miller and another claimant, hairdresser Deir Dos Santos, went to court to argue that leaving the EU would remove some of their rights, including free movement within the bloc, and that shouldn’t be done without Parliament’s approval.

Last month, three High Court judges agreed. But the government says they have misinterpreted the law.

Opening the government’s arguments, Attorney General Jeremy Wright said the use of prerogative powers didn’t undermine Parliament, because the legislature had been in the driver’s seat throughout the referendum process.

He said lawmakers had passed the European Referendum Act of 2015, laying out the rules for a referendum on EU membership, in “universal expectation ... that the government would implement its result.”

Wright said the government wasn’t using prerogative powers “on a whim or out of a clear blue sky” but as the result of a process in which Parliament had been “fully and consciously involved.”

Though the courtroom drama is unfolding in cool legal language, it has set public passions simmering.

November’s ruling infuriated pro-Brexit campaigners, who saw the lawsuit as an attempt to block or delay Britain’s EU exit. The anti-EU Daily Mail newspaper labeled the justices “enemies of the people.”

Miller - who has received a torrent of online abuse for her role in the case - arrived at court Monday with her lawyers to cheers from pro-EU campaigners dressed as judges atop an open-topped double-decker bus.

“Nigel, where are you?” they sang mockingly, in reference to former UK Independence Party leader Nigel Farage, a prominent voice in the leave campaign.

He had vowed to lead a march on the Supreme Court to demand judges respect the will of the majority. It was canceled last week after organizers said there was a risk it could be hijacked by far-right extremists.

In a reflection of the constitutional importance of the case, all 11 Supreme Court judges are hearing the appeal, the first time the full court has sat since it was founded in 2009. They are likely to give their ruling in January.

Complicating the picture are new participants including politicians in Northern Ireland, who also want a say, and the Scottish government, which argues the Edinburgh-based Scottish Parliament should get a vote too. Britons voted by 52 percent to 48 percent to leave the EU, but voters in Scotland strongly backed staying in, and the Scottish government says they shouldn’t be dragged out of the 28-nation bloc against their will.

Many legal experts say the government will likely lose its appeal and be forced to give Parliament a vote.

“The arguments this time round are pretty much the same as in the last case - and I suspect the outcome will be the same,” said Nick Barber, associate professor of constitutional law at Oxford University.

While anti-EU campaigners say the lawsuit is an attempt to block Brexit, it is unlikely to stop Britain leaving the EU. A debate in Parliament could delay the timetable, but most lawmakers from the major parties have said they won’t try to overturn the referendum result.

They could, however, seek a greater say in the government’s negotiating strategy - something May and other ministers have been unwilling to disclose for fear of tipping their hand.

This is the highest-profile case in the court’s history and Neuberger said the judges were “aware of the strong feelings” about Britain’s EU membership.

“However, as will be apparent from the arguments before us, those wider political questions are not the subject of this appeal,” he said. “This appeal is concerned with legal issues; and, as judges, our duty is to consider those issues impartially, and to decide the case according to the law.

“That is what we shall do.”