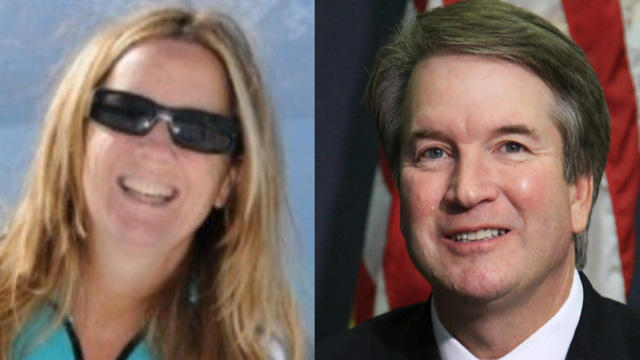 The status of a public hearing set for Monday into the allegations against Judge Brett Kavanaugh remained in doubt after lawyers for the woman accusing the judge of sexual misconduct say they want a thorough FBI investigation into the matter before testifying in front of the Senate Judiciary Committee. In a letter sent to Committee Chairman Chuck Grassley, Christine Blasey Ford's lawyers say the FBI investigation would serve as a first step in the process to their client testifying in public.

President Trump told reporters on the White House South Lawn Wednesday morning that it would be "wonderful" if she testifies, and "unfortunate" if she does not, and, though he said he'll have to hear what she has to say, said it was "very hard for me to imagine anything happened" between her and Kavanaugh.

"I think he's an extraordinary man -- I think he's a man of great intellect, as I've been telling you, and he has an unblemished record," the president said Wednesday. "This is a very tough thing for him and his family and we want to get over it but at the same time we want to give tremendous amounts of time. If she shows up that would be wonderful if she doesn't show up that would be unfortunate."

"If she shows up and makes a credible showing, that'll be very interesting," the president also said, adding that he "really would want to see what she has to say" in order to express more opinions of her.

Mr. Trump didn't indicate he would direct the FBI to conduct any further review of the situation, saying, "Well, it would seem the FBI really doesn't do that." The FBI has told CBS News that it has included the allegation in Kavanaugh's background file, and is not opening any additional probe at this time, although the president could theoretically direct the FBI to undertake a further review. Ford has told the committee she doesn't wish to testify next week without a concluded FBI investigation. The president said he trusts the Senate to do its job.

While Kavanaugh intends to return back before the Senate on Monday with or without Ford present, a GOP aide tells CBS News' Nancy Cordes that the committee intends to "leave the opportunity open" for Ford to testify "for as long as possible." It's unclear how the latest developments will impact an eventual vote on Kavanaugh's confirmation out of committee, originally set for this Thursday.

Follow along for live updates on Kavanaugh coverage below

McCaskill says that she will not vote for Kavanaugh

Sen. Claire McCaskill, one of the most vulnerable Democratic incumbents up for re-election this year, released a statement Wednesday evening saying that she would not vote for Kavanaugh.

"While the recent allegations against him are troubling and deserve a thorough and fair examination by the Senate Judiciary Committee, my decision is not based on those allegations but rather on his positions on several key issues, most importantly the avalanche of dark, anonymous money that is crushing our democracy," McCaskill wrote.

Ford lawyer Lisa Banks released a statement Wednesday evening responding to GOP plans to continue with the hearing on Monday, saying that it was "not a fair or good faith investigation." Banks said that multiple witnesses should be called. The committee has only called Ford and Kavanaugh to testify on Monday.

"The rush to a hearing is unnecessary, and contrary to the Committee discovering the truth," Banks said, according to the Washington Post. She did not say whether Ford would testify on Monday.

"Dr. Ford was reluctantly thrust into the public spotlight only two days ago.  She is currently unable to go home, and is receiving ongoing threats to her and her family's safety. Fairness and respect for her situation dictate that she should have time to deal with this.  She continues to believe that a full non-partisan investigation of this matter is needed and she is willing to cooperate with the Committee.  However, the Committee's stated plan to move forward with a hearing that has only two witnesses is not a fair or good faith investigation; there are multiple witnesses whose names have appeared publicly and should be included in any proceeding.  The rush to a hearing is unnecessary, and contrary to the Committee discovering the truth," Banks said in the full statement.

Second, your request ignores the fact that Dr. Ford has already made her allegations public. The purpose of the background investigation process is to compile information in a confidential manner. Confidentiality permits people to speak freely and candidly about the character and qualifications of the nominee. The White House requires the Senate to keep background investigation files private so that people can speak anonymously to investigators if they so desire. Because Dr. Ford's allegations are in the public arena, there is no longer a need for a confidential FBI investigation.

Senator Feinstein only informed the FBI of the allegations after they were leaked to the media on the eve of a confirmation vote. The proper course of action would have been to investigate Dr. Ford's serious allegations as quickly and as thoroughly as possible, as I did as soon as these allegations were made known to me."

Sen. Susan Collins of Maine told WVOM radio that Ford and her family should be provided with "law enforcement protection" amid claims that she is currently receiving death threats after speaking out against Kavanaugh. Collins told the local station that her office has also been subject to threats, calling the entire confirmation process "very ugly."

"My office has received some pretty ugly voicemail threats, terrible things said to my staff," she explained.

Asked if she felt there would be hearing on Monday if Ford does not show up, Collins said "I don't."  She said a no-show from Ford would be a "real disservice" to both Kavanaugh and Ford. Collins said she was unsure of Grassley's plans to schedule a vote without Monday's hearing, saying that "the effort right now is to convince Dr. Ford to come forward and I think it would be better for her to do so."

Collins noted that Ford has been extended the option to testify in a public or closed-door hearing sessions as well as an interview with a bipartisan team of committee investigators, all of which Ford has declined, according to Collins, pending an FBI investigation. The Senator argued that Ford can't reject all the options given "because otherwise there's very serious allegations hanging over the head of a nominee who has emphatically denied them and that's not a good way for us to end."

In a new letter from Chairman Grassley, the committee has extended Ford the option to testify on Monday in a closed-door session if she so chooses.

"I have reopened the hearing because I believe that anyone who comes forward with allegations of sexual assault has a right to be heard, and because it is the Committee's responsibility to fully evaluate the fitness of a nominee to the Supreme Court. I therefore want to give Dr. Ford an opportunity to tell her story to the Senate and, if she chooses, to the American people. I also want to give Judge Kavanaugh an opportunity to respond to the allegations. By hearing out both Dr. Ford and Judge Kavanaugh, the Committee will endeavor to discover the truth of the matter, and will be better able to make an informed judgment about Judge Kavanaugh's nomination," wrote Grassley.

Grassley also responded to Ford's lawyers' requests that the FBI conduct a separate investigation before their client testifies. In the letter, Grassley argued that it's not the FBI's role "to investigate a matter such as this."

"The job of assessing and investigating a nominee's qualifications in order to decide whether to consent to the nomination is ours, and ours alone," he added.  Grassley advised Ford's attorneys that prepared testimony and biography are due to the Committee by 10:00 a.m. on Friday, September 21, if she intends to testify on Monday.

The president took a number of questions about Kavanaugh on the White House South Lawn on his way to North and South Carolina Wednesday.

Mr. Trump did not indicate he would direct the FBI to conduct any further review of Kavanaugh. He said it would be "wonderful" if Ford testifies and "unfortunate" if she does not, saying he trusts the Senate to vet Kavanaugh.

"If she shows up and makes a credible showing, that'll be very interesting," the president said, noting he "really would want to see what she has to say."

In an interivew with ABC's "Good Morning America, Dr. Anita Hill said there should "absolutely" be a FBI investigation before Ford testifies in order for the facts to be collected and have a neutral investigation – from which Senators can develop their questions.

She did not say that Ford has a duty to testify but rather the question is whether Senators will give her a real chance to speak instead of a "sham proceeding". She encouraged Senators to wait until the facts of the investigation are pulled together so there can be an impartial hearing – as it is a responsibility to the American public.

Grassley says no reason for delays in Ford's testimony

In response to Ford's letter late Tuesday evening, the GOP chairman of the Judiciary Committee, Chuck Grassley of Iowa, issued a statement attempting to put the ball back in Ford's court on whether or not to appear before the Senate.

"Dr. Ford's testimony would reflect her personal knowledge and memory of events. Nothing the FBI or any other investigator does would have any bearing on what Dr. Ford tells the committee, so there is no reason for any further delay."

Sen. Bob Corker, a member of the Senate Judiciary Committee, says if lawmakers don't hear from both sides during Monday's hearing, the committee should move to a vote.

"Republicans extended a hand in good faith," Corker tweeted Tuesday night, commending Chairman Grassley for taking "immediate action to ensure both Dr. Ford and Judge Kavanaugh have the opportunity to be heard, in public or private."