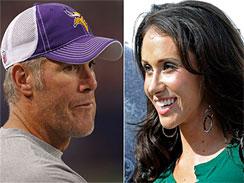 (CBS/AP) Brett Favre may have already taken his last snap as a NFL quarterback, but the league is not quite done with him yet.

Commissioner Roger Goodell's investigation into improper behavior by Brett Favre with former New York Jets media personality Jenn Sterger has lead to a $50,000 fine and not a suspension, reports the Associated Press.

The league says Commissioner Roger Goodell "could not conclude" that Favre violated the league's personal conduct policy based on the evidence currently available, the AP reports.

Favre was ultimately punished not for the actual text and phone messages, but instead for not cooperating with the league's investigation, the AP reports.

The league's statement also says Goodell determined Favre was "not candid in several respects during the investigation resulting in a longer review and additional negative public attention for Favre, (Jenn) Sterger and the NFL."

The league wanted to make a ruling before the end of the season, but did not want to do it on New Year's, reports Fox Sports.

Favre and Sterger made national headlines after sports media website Deadspin reposted explicit texts, phone messages and photos the famed quarterback allegedly sent Sterger while both were with the Jets.

Sterger later claimed Favre continued to harass her after she rejected his advances and he left the team.

Sports Illustrated's Peter King said the league ultimately decided not to suspend Favre because it couldn't prove the photos - some of which included pictures of a penis - were from Favre, or were even of Favre.

The NFL was still interviewing and gathering information on the case as recently as last week, Fox Sports reports.

Earlier this year, Goodell suspended Pittsburgh Steelers quarterback Ben Roethlisberger for six games after he was accused of sexually assaulting a college student during a drunken night out in a Georgia college town over the summer.

No charges were ever filed against Rothlisberger. The suspension was eventually reduced to four games.