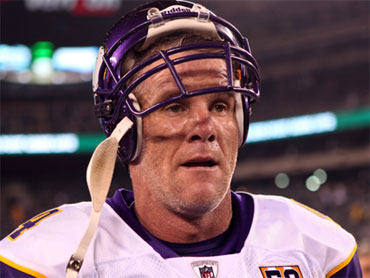 William C. Rhoden from the New York Times tells us that Brett Favre's "party is over" (For Favre, It's Finally the Point of No Return, NYT 10/12/201). And he reminds us not once or twice but three times of his opinion through this cliche. And though Rhoden does offer consolation nods to Favre's two excellent post-Green Bay seasons, he makes journalistic faux pas by asking several questions with no real replies. These queries pertain to the embroiled topic of athlete retirement and fail to adequately move toward some level of understanding.

So we might ask if this is just more selling of sex.

But this reporter asks why we should care about Favre's unproven allegations of sexually-charged messages to a game hostess. And Rhoden suggests it's because of "our fascination with how celebrities live in their protective bubbles and by what happens when the bubbles burst." But that tell us nothing. Yes, we have this odd even lamentable draw toward the lives of celebrities (and sex) when they are both in and out of vogue. But this too-sequitur is akin to claiming that we are drawn to our heroes because we want to know more about our heroes.

Rhoden follows with three very good questions pertaining to athlete retirement that perhaps we can help him with. He asks:

1. Do they walk away gracefully?

It all depends on the athlete; their sport, what they've accomplished, their health, age, gender, education, level of counseling, and of course, anyone's definition of "grace." In some circles, Favre defines grace by refusing to leave on anyone's terms but his admittedly-oscillating own. Media pundits will argue however, that he left grace on a teary floor back in Green Bay. Webster defines grace as "beauty or charm of form, composition, movement or expression." Favre has not walked away with grace perhaps because he has not fully walked away. His movement is unfinished, his composition incomplete.

2. Do they find other ways to perform magic?

Yes, many athletes transcend their excellence in sport into arenas well beyond our imagination and stereotype. Michael Oriard, for example, played in the NFL for nearly seven years and now serves as an Associate Dean at Oregon State University. He is arguably the top scholar in America within the area of sport fiction literature. Many others spread their magic across playing fields of commerce, military, politics, and religion. If you follow the money trail, the rhetoric that suggests every retired pro athlete is broke, depressed, and destitute is oft-driven by financial management firms looking to save ex-pro financial souls from themselves. Commissions not included.

3. Do they dare the game to crush them if it can?

Great question, Mr. Rhoden. And in Favre's case, I sure as hell hope so. The Game, if we haven't noticed, has little integrity and loyalty to the players. Gladitorialized as they are, I admire an athlete who both admits straight up they are blessed with the opportunity but they are expendable, a cog in a for-profit wheel and damn if they're going to give it their all then let The Game try and match their commitment. Green Bay should've known this about Favre--he plays for reasons only reason knows and only the village idiot would suggest it's really about the money. No, its gone way beyond issues of identity, habitus, and cheesy "love of the game" phrases. For Favre, as it was with Ted Williams, it's very, very personal. You either understand them or you don't.

Forget the sex-ting thing for the moment. For players that refuse to go quietly it's never simple because they aren't simple people. Reporters who differ to the standard "should've gone out on top" dogma are simply illustrating their inability to understand a complicated paradigm in which they are complicit. Favre is in the news again for cyber-allegations of deviant behavior and because he still doesn't fit our comfortably universal narratives. He's just too good for his age and maybe too deviant for our Sunday afternoon cartoons.

Rhoden does reach veracity in his penultimate paragraph however by suggesting, "it is that this whole public persona of superstar athletes is largely little more than a news-media-enabled masquerade designed to attract volume and hits. They'll be whoever we want them to be."

Perhaps with quick-hit observations such as this, professional athletes will indeed be whatever sportswriters want them to be.

But in the case of Favre, I doubt it.