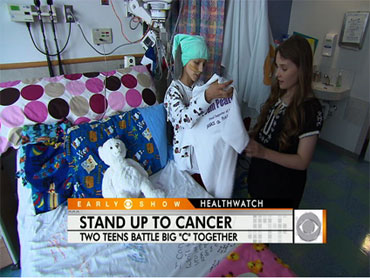 Abigail Breslin, a 14-year-old Oscar nominated actress, famous for her role in "Little Miss Sunshine," is bringing some of her own sunshine to the lives of those battling cancer and those who have survived the disease.

The talented actress not only pulls on your heartstrings on the big screen, but in real life she is a kind and supportive friend to Pearce Quesenberry, a 13-year-old brain cancer survivor.

The two met when Abigail was invited to visit the Children's Hospital of Philadelphia. The girls became friends and a few months later both traveled to Los Angeles to take part in the fight against cancer and appeared together in the 2008 "Stand Up To Cancer" telecast.

This year they will return and be a part of tonight's "Stand Up to Cancer" telecast, where their touching story will be featured, but this time Pearce will be cancer-free.

CBS News Correspondent Elaine Quijano tells the story of the two teenage friends who are both battling cancer, each in a different way:

The "Stand Up to Cancer" telecast airs tonight at 8 p.m., 7 Central simultaneously on CBS, NBC and ABC.