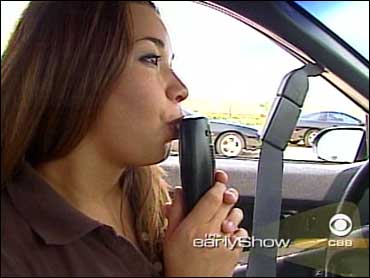 More and more parents are breathing new life into an old problem: teens drinking and driving.

As The Early Show national correspondent Hattie Kauffman reports, nearly 17,000 people are killed by drunk drivers in the United States every year.

Now, Kauffman points out, some adults are volunteering to get them. And others are insisting their teenage sons and daughters have them installed in their vehicles.

Steve Carter calls the breathalyzer he bought on his own for his car "a constant reminder, you know, to keep myself sober."

The device won't let the car start if there's any alcohol in his system.

"I'm not invincible," Carter, who lives in Colorado Springs, told Kauffman, "and, if I continue behaving and continue drinking in this manner, it's gonna kill me."

Or, Kauffman observes, someone else.

She says Carter's been to jail three times for driving under the influence.

He describes his violations as, "High speeds; tried to take a 90 degree, you know, city block turn and slammed headlong into a building. … That could easily have been another person."

Carter admits he shudders to think about it.

"It seems to me," Kauffman surmised, "that what's going on here isn't the punishment aspect, after you've gotten in trouble. It's the prevention aspect?"

"Oh, absolutely," Carter confirmed. "I think people can follow my lead, and I think we'll have a lot fewer drunk driving deaths."

How long does he think he'll have the breathalyzer in his vehicle?

The majority of drunk driving accidents are caused by chronic drinkers, Kauffman notes. Studies show ignition-locking breathalyzers can cut those repeat offenses by at least 50 percent.

One New York legislator has actually proposed that breathalyzers be installed in every car, though the idea has drawn heavy opposition.

But, Kauffman asked, if the breathalyzers work for chronic adult offenders, might they also serve as a preventive measure for another high-risk group: teenagers?

Keller, Texas high school senior Amie Gallegus has never had a DUI. But she has a breathalyzer.

Her mother, Linda Salo, put the device in her car after Gallegus was cited for underage drinking.

"She still thinks she would never drink and drive," Salo says. "But I saw the patterns, so I knew."

Kauffman met with a bunch of teens in Keller who knew all about the temptation to drink.

"How much drinking goes on at teenage parties?" Kauffman inquired.

Gallegus says, "A lot of parents think that their kids will call them if they've been drinking and don't have a ride home. But it's very rare that that happens."

"Because you don't want your parents to see the way you act when you're drunk," explained high school student Evan Schmidt.

To be sure, answered Elwis: "One girl hit a car. Just driving, trying to get to the street. She hit a car. She didn't even know she'd hit it. She just kept on driving."

"She killed her boyfriend and her best friend. And she was only 16," Gallegus said.

Even knowing of that tragedy, Gallegus wasn't happy to be the first kid in school with a breathalyzer.

"Since I've gotten the breathalyzer, it's like an excuse for me not to have to drink," Gallegus says.

And the results have been dramatic.

"She quit drinking completely," Salo says, "and she stayed away from the friends who were influencing her to drink."

But critics claim breathalyzers can easily be defeated.

John Doyle of the American Beverage Institute explains that, "They can be overridden with air compressors. You can get someone else to blow in 'em."

Yet, the president of a breathalyzer company believes in them enough to have installed one in his daughter's car.

Jennifer Ballance told Kauffman she doesn't think she has a drinking problem and has "never gotten in trouble, ever, for drinking."

Not so fast, says her father, George Ballance, who heads Drager Safety of Irving, Texas: "In fact, I found half of a six pack in her purse when she was getting ready to go out. And that was the day before I installed the device."

It records the blood alcohol level from every test, enabling parents to monitor the situation.

For instance, George told of the time Jennifer "was at a point-oh-four, and tried to start the vehicle."

"I just had a beer earlier in the night," Jennifer insisted. "I don't know why it failed to start."

A printout of test results says she failed twice more in the next hour and, instead of her alcohol level going down, it went up, which means, George said, "She had another drink, because it's very stable."

"So," Kauffman asked, "if she says to you, 'No, I didn't have a drink,' you know that's not true, because you have the results?" Kauffman wanted to know.

"I was really frustrated," Jennifer says, "but then, I was like, 'Well, I guess I'll just call a cab."

And that, Kauffman exclaims, is music to a parent's ears, even though the price of a breathalyzer is roughly $1,000.

Salo considers that a price well worth paying, saying, "You can't put a price on peace of mind. (My daughter has) been scared straight."