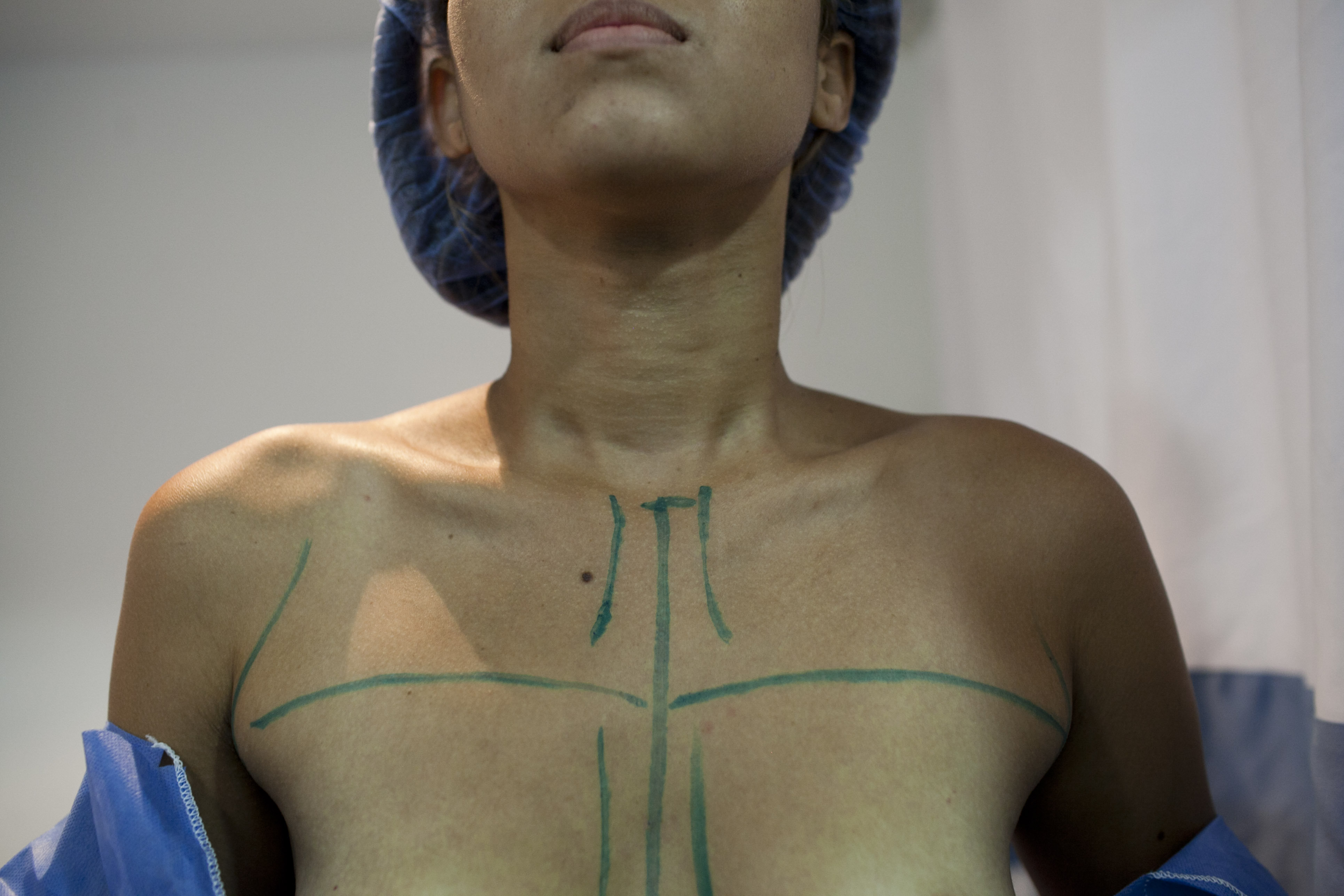 Venezuela's chronic shortages have begun to encroach on a cultural cornerstone: the boob job.

Beauty-obsessed Venezuelans face a scarcity of brand-name breast implants, and women are so desperate that they and their doctors are turning to devices that are the wrong size or made in China, with less rigorous quality standards.

Venezuelans once had easy access to implants approved by the U.S. Food and Drug Administration. But doctors say they are now all-but impossible to find because restrictive currency controls have deprived local businesses of the cash to import foreign goods. It may not be the gravest shortfall facing the socialist South American country, but surgeons say the issue cuts to the psyche of the image-conscious Venezuelan woman.

"The women are complaining," said Ramon Zapata, president of the Society of Plastic Surgeons. "Venezuelan women are very concerned with their self-esteem."

Venezuela is thought to have one of the world's highest plastic surgery rates, and the breast implant is the seminal procedure. Doctors performed 85,000 implants here last year, according to the International Society of Aesthetic Plastic Surgery. Only the U.S., Brazil, Mexico and Germany - all with significantly larger populations -- saw more procedures.

There are no official statistics on how many Venezuelans are walking around with enhanced busts. But a stroll down any Caracas street reveals that the augmentations are at least more conspicuous here than in other surgery-loving places. Even the mannequins look they've gone under the knife.

Until recently, women could enter raffles for implants held by pharmacies, workplaces and even politicians on the campaign trail. During this spring's anti-government street demonstrations, the occasional sign protesting the rising price of breast implants mixed in with posters railing against food shortages and currency devaluation.

"It's a culture of `I want to be more beautiful than you.' That's why even people who live in the slums get implants," surgeon Daniel Slobodianik said, fiddling with an FDA-approved pouch of saline solution no longer on sale here.

Slobodianik used to perform several breast implants each week, but now performs closer to two a month. He says women call his office every day asking if he the implant size they're looking for. When they can't find it, they choose a second-best option, almost always a size up.

No one is giving the frustrated women much sympathy, especially not the government. The consumerism of plastic surgery has always jibed awkwardly with the rhetoric of socialist revolution. The late President Hugo Chavez called the country's plastic surgery fixation "monstrous," and railed against the practice of giving implants to girls on their 15th birthdays.

On social media, some Venezuelans take a judgmental tone, saying the panic over implants shows the real shortage here is values. Others joke that the scarcity will force Venezuelan women to start developing their personalities, using a Twitter hashtag that riffs on the Colombian telenovela "Sin Tetas, No Hay Paraiso" ("Without Boobs, There's No Paradise").

In the absence of U.S. brands, plastic surgery has become an area dominated by Venezuela's chief trading partner, China, whose goods are often given priority for import over those from other countries. They're also a lot cheaper. While a pair of implants approved by European regulators can cost as much as $600 - about the same as the annual minimum wage here - the Chinese equivalent goes for a third of that. Some Venezuelan doctors refuse to use the Chinese devices, which are not subjected to random government inspections or clinical studies.

"I'm not saying they're not safe, but I've removed more than a few ruptured Chinese implants. I just don't feel comfortable with them," Slobodianik said.

April Lee, an analyst at the Massachusetts-based health care research company Decision Resources Group, said the medical community frowns on the use of non-FDA-approved implants.

Unable to find the devices in doctors' offices, some women are turning to the Venezuelan equivalent of the bartering website Craigslist, where sellers post pictures of black market implants of unknown origin sitting in sealed packages on kitchen tables, complete with stories of spouses who changed their minds and reassurances that the pouches remain sterile.

It's not just women looking for a more attention-getting silhouette who are struggling; some patients are in urgent medical need. Lisette Arroyo, 46, waited two months this summer to get her ruptured implants replaced, dealing with intense itching while waiting for new devices to arrive from France. She had to buy them directly from the manufacturer before they could be shipped, spending the entire $300 in foreign currency the government permits Venezuelans annually. The surgery can cost another $800.

"This country is not what it used to be," she said earlier this month as awaited surgery in a blue paper gown.

For the doctors trying to manage their patients' expectations, the shortages are no less grave than Venezuela's other hardships. Dr. Miguel Angel Useche's, who performed Arroyo's delayed surgery, says women sometimes save for years for their operations, and to be told they must wait longer can be unbearable.

"Women call me up saying: 'I've made so many sacrifices for this. How can you not help me?'" he said.