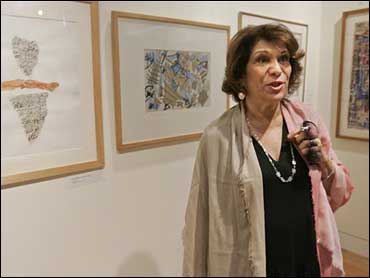 In the months following the Sept. 11 terrorist attacks, Princess Wijdan Al Hashemi and her friend Aliki Moschis-Gauguet noticed that the only depictions they saw of Muslim women showed figures behind veils, oppressed by their cultures.

Moschis-Gauget said, "'Do you see what's going on in the media? ... Muslim women are being portrayed as women living behind long veils,"' said Al Hashemi, founder and director of the Royal Society of Fine Arts of Jordan. "She couldn't stand the way Muslim and Arab women were being portrayed."

Al Hashemi and Moschis-Gauguet, president of the Pan-Mediterranean Women Artists Network, turned to the world they knew best to find an answer: the world of art.

To combat what they saw as misperceptions about the Muslim world and Arab nations, the two women teamed up to create a traveling exhibit featuring female artists from Islamic countries. The show "Breaking the Veils: Women Artists From the Islamic World" began its three-year United States tour at the Clinton Presidential Library, where it will be on view through Sept. 14.

The exhibit features works by 52 women from 21 Islamic countries, from Algeria to Yemen. It previously toured 15 European cities and Australia.

Despite the show's title, not all the artists are Muslim. Al Hashemi said some works are by Buddhists, Christians and Hindus from the Arab world.

"When we say the Islamic world, we mean the cultural world ... not the religious world," Al Hashemi said.

She said she is hopeful the works will eliminate stereotypes and misconceptions many have about Islam and Arab countries. For example, she said, many visitors have been surprised by the works of art that depict humans or animals. Although some Muslims oppose any art that depicts humans, Al Hashemi said such works are common throughout Islamic countries.

"The presentation of human images in Islam is only prohibited in mosques and places of worship to keep the Muslims from going back to worshipping idols," she said. Al Hashemi calls the opposition to depictions of human figures an "extreme interpretation" to the Quran's strict opposition to idolatry.

Some of the pieces touch on the political issues facing Islamic countries. A series of paintings by Laila Shawa, a Palestinian artist living in London, touch on the conflict between Israel and Palestinians.

Shawa's silkscreen on paper work, "Amended Resolutions 1," superimposes a United Nations resolution that established a special committee to investigate Israeli practices in occupied territories with the image of rubble, possibly a destroyed home.

A piece by Fahda Bint Saud of Saudi Arabia depicts three women whose faces and entire bodies are concealed by a veil--one covering her eyes, another her ears and the third her mouth.

The exhibit also includes a work by Al Hashemi, who wrote Arabic calligraphy in several colors on layers of handmade paper.

"It says, `He is Love,"' she said as she toured the exhibit before its opening at the Clinton library.

Most of the artists featured won't be on hand for its U.S. tour. After Little Rock, the art will be displayed at the University of Southern Mississippi in Hattiesburg beginning in October, said Susan Anderson, executive director of the ArtReach Foundation, which is presenting the paintings during its U.S. tour.

Nawal Abdullah, a painter living in Amman, Jordan, said in a telephone interview that she hoped the exhibition would bridge a gap between the cultures. By showing the art of the Islamic world, she said, the exhibit shows that there are more similarities than differences between the United States and Islamic countries.

"Art for me is my language," said Nawal Abdullah. "It's a means for a need to communicate the true feelings. I hope that people will understand me and they will all feel the same language."