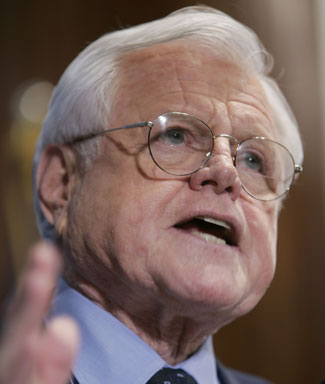 The FBI today released over 2,000 pages from its files on the late Sen. Ted Kennedy. Here are some portions of the files that stand out:

The files include a detailed report about how a person in his "late teens" gained accessed to Kennedy's house in Washington and was chased off by a caretaker. (Presumably Kennedy was not there at the time). The man kept saying he was on his Senate staff. He also tried to get on a plane from Washington to Boston but was stopped. (Kennedy was not on the flight). The man was first described as a "pest," but after the behavior continued, they said he was "more of a problem."

The other files detail a wide range of threats, many by people who were deemed mentally ill or drunk; most of the threats were reported by people who heard them being made over the phone, either at a payphone or in an office such as the Palm Beach newspaper.

In other cases, people reported members of their own families. In one instance, a mom reported her teenage son, saying he wanted to "simulate an assassination of Ted Kennedy with a wooden gun." The FBI report described the boy as 5 feet, 3 inches tall and 120 pounds. Another person attending a reception reported that the father of the bridegroom launched into an anti-Kennedy harangue saying: "Kennedy, King, Kennedy, only one to go."

On June 11, 1968, a sociology professor whose name is redacted writes a letter to the U.S. Secret Service that says "the kind of mind that thinks about political assassinations is likely to find Edward Kennedy, the last Kennedy, particularly alluring. I hope you'll consider providing him some protection, at least for awhile".

One threat came in via pay phone from the New England Oysterhouse in Coral Cables - from somebody identified as Sonny Capone. The FBI says "he may be identical with Francis Capone, Jr., the son of the late notorious Chicago hoodlum, Al Capone."