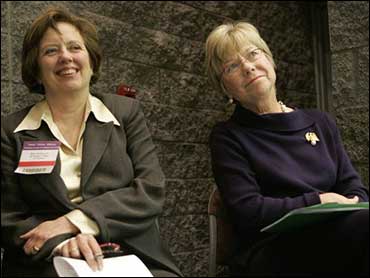 Burger King began offering two new breakfast sandwiches Monday, including one that packs more calories and fat than a whopper.

The enormous omelet sandwich carries 730 calories and 47 grams of fat and comes with two eggs, sausage, three strips of bacon and two slices of melted American cheese on a bun. It's heftier than a whopper hamburger, which weighs in at 700 calories and 42 grams of fat.

The other new breakfast item, the Western Omelet Croissanwich, is a lighter pick with 320 calories and 17 grams of fat. It has fire-grilled onions, ham and melted American cheese inside a folded egg on a croissant.

The omelet sandwich will stay on the menu at about $2.99, but the western sandwich is in stores until May 8.

U.S. ramps up search for undetected polio, as vaccinations stall in New York
Thanks for reading CBS NEWS.
Create your free account or log in
for more features.
View CBS News In
CBS News App Open
Chrome Safari Continue
Be the first to know
Get browser notifications for breaking news, live events, and exclusive reporting.