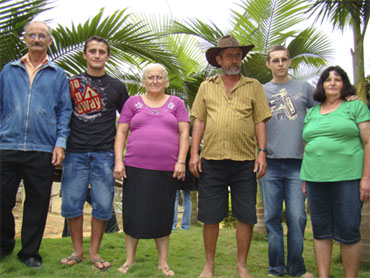 Two years back, Dimas Aliprandi and Elton Plaster didn't know of each other's existence. Then they learned they had been accidentally switched at birth more than 20 years ago.

The discovery didn't bring bitterness or recrimination. Rather, it led to the creation of a bigger family.

Today, the two 25-year-olds are living and working together with both sets of parents growing vegetables and coffee on a small farm in southeastern Brazil.

The chain of events started with Aliprandi, who was always intrigued that he did not resemble the four sisters he grew up with.

"There was something different," he told The Associated Press by phone. "I had blonde hair and blue eyes and my sisters had dark hair and eyes.

"I had the typical features of a descendent of German immigrants, while my sisters and parents were of Italian stock. Something did not add up"

Aliprandi said he was 14 when his suspicions intensified after watching a TV news report on babies getting switched at birth because of mistakes at hospitals.

"I told my father of my doubts and that I wanted to do a DNA test. But it was too expensive" for the family, he said.

A decade later, Aliprandi did it on his own.

"In December 2008, when I was 24, I decided I needed an answer to my doubts and paid 300 reals ($166) for a DNA test that confirmed my suspicions that I was not the birth son of the man and woman who had raised me," he said.

It was a big shock for his parents, Zilda and Antonio Aliprandi. They at first refused to believe the results, but eventually decided to help him look for his biological parents.

The search began at the Madre Regina Protmann Hospital, where he was born.

"I showed the hospital the results of the DNA test and told them that they proved that I had been switched at birth," Aliprandi said.

But hospital officials were skeptical, he said, and asked him to have another DNA test, which he did three months later.

Repeated calls to the hospital for comment went unanswered.

The DNA results were the same as the first - Aliprandi had been given to the wrong mother as an infant.

He said the hospital then searched its records and found Elton Plaster was born there on the same day.

The records led Aliprandi to the 35-acre farm where Plaster lived with his parents, Nilza and Adelson, in the town of Santa Maria de Jetiba, about 30 miles from the Aliprandi home in Joao Neiva.

The Plasters agreed to do DNA tests.

"They discovered that Elton was the biological son of the man and woman that I had been calling Mom and Dad for 24 years," Aliprandi said. "Meanwhile, Elton discovered that the couple he had always regarded as his biological parents were mine." 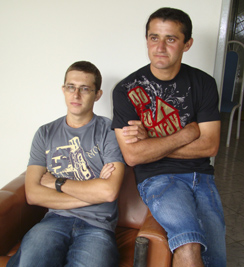 (AP Photo/Julio Huber)
The discovery did not cause any upset, he said.

"Instead it sparked a desire to join our families," Aliprandi said. "Elton and I wanted to remain with those who raised us and with our birth parents. We wanted to expand our families."

So about a year ago, Aliprandi and the parents who raised him accepted an offer from the Plasters to move to their farm, where they built a home.

"This is the way it should be," Adelson Plaster recently told Globo TV. "We are all together and I now have two sons living and working here."

Aliprandi and Plaster both feel blessed by their new circumstances.

"It's not everyone who can say he has two fathers and two mothers living together with him," Aliprandi said.
By Associated Press Writer Stan Lehman