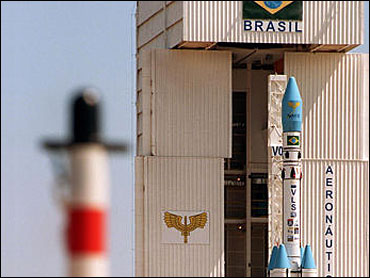 A rocket exploded on its launch pad Friday while undergoing final pre-launch tests, killing at least 21 people and wounded 20 others, officials said.

Globo television showed footage of a plume of smoke rising high into the sky over the seaside launch base, 1,460 miles north of Sao Paulo.

The blast came as technicians were putting the finishing touches on a rocket that would make Brazil the first Latin American nation to put a satellite in space.

The explosion, which destroyed the VLS-3 rocket that was undergoing tests at the Alcantara Launch Center, dealt a serious blow to Brazil's nascent space program.

"We had just done two days of tests and everything went well — 100 percent. Everybody is devastated," said Brazilian air force Col. Romeo Brasileiro.

The $2.2 million rocket was scheduled to fly into space next week carrying a research satellite developed by Brazil's National Space Research Institute. The satellite also was destroyed.

The air force said in a statement there was no damage outside the launching area.

It was Brazil's third failed attempt to send a Satellite Launch Vehicle into space with a research satellite.

A rocket launched in November 1997 crashed in the Atlantic Ocean after suffering engine problems shortly after blast off.

Brazil has operated a scientific space program since the early 1970s and sent its first satellite into space in 1993 on board a U.S. Pegasus rocket. The country's space program centers on gravity research, meteorology, telecommunications and environmental research.

Alcantara is considered a near-ideal launch site because of its location, just 2.3 degrees south of the equator. The Earth's rotation is faster at the equator, which helps propel rockets into space with less fuel and with heavier payloads.

Employment in Brazil's aerospace industry could grow to 24,000 people by 2005 from a current 15,000, and the industry's current revenues of about $3.1 billion a year could more than double by then, the Association of Brazilian Aerospace Industries said earlier this month.