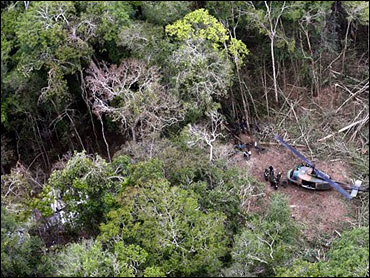 A court said Tuesday it had released the passports of two U.S. pilots of a private jet involved in a collision with a Boeing 737 over the Amazon that killed 154 people.

Joseph Lepore, 42, of Bay Shore, N.Y., and Jan Paladino, 34, of Westhampton Beach, N.Y., can pick up their passports and leave the country in 72 hours, the Federal Regional Court of the First Region of Brasilia said in a unanimous ruling.

The Americans were piloting a Brazilian-made Legacy executive jet when it collided Sept. 29 with a Gol Airlines Boeing 737-800. All 154 people on board the Gol flight were killed, while the Legacy landed safely with all seven people aboard unharmed.

Shortly after the accident, authorities seized the passports of Lepore and Paladino, effectively barring them from leaving Brazil. They had since been in a hotel in Rio de Janeiro's Copacabana beach.

Prosecutors have said they could be charged with involuntary manslaughter if they are found responsible for the crash. The pilots have denied any wrongdoing.

Authorities had earlier said the passports would not be returned until an investigation into the crash is completed.

Federal judge Candido Ribeiro said Tuesday there were no legal grounds for restricting their movements.

However, the two must agree to return to Brazil for any further inquiry and judicial action, the court said.

Brazil is still investigating the crash, the worst in Brazilian history.

The Embraer Legacy jet was owned by ExcelAire of Ronkonkoma, N.Y., which did not immediately comment on the release.

Company attorney Robert Torricella, who has been in Rio with the pilots since shortly after the crash, said they expect to release a statement later.

The Legacy was heading northwest on its maiden voyage from the southern city of Sao Jose dos Campos, to the United States when the accident occurred at an altitude of 37,000 feet — a height usually reserved for southbound flights.

Transcripts suggest the Legacy had been authorized by the tower in Sao Jose dos Campos to fly at 37,000 feet to Manaus, although that contradicted its original flight plan.

Warning systems failed on both planes before they collided, an air force investigator said last month.