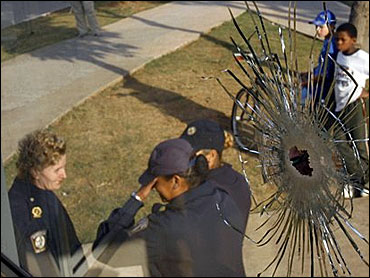 Police killed 13 suspected gang members in shootouts early Monday after authorities foiled a plot to launch a new wave of attacks against officers on the fringes of Brazil's largest city, officials said.

Ten suspected members of the First Capital Command gang were shot dead in an exchange of gunfire with police in the suburb of Sao Bernardo do Campo, and three were killed in the Diadema suburb, said state police spokesman Otavio David.

The killings came just over a month after the gang's imprisoned leaders allegedly ordered attacks against police across the city and Sao Paulo state, initiating a weeklong wave of violence that killed nearly 200 police, prison guards, suspected criminals and jail inmates.

No police officers were killed in the fresh attacks, David said. Police took seven people into custody, all suspected members of the gang. They also seized 15 heavy-caliber firearms.

Last month's attacks terrified Sao Paulo, prompting businesses to shut down and people to pull their children from school after suspected gang members torched scores of buses and attacked other symbols of authority across South America's largest city.

But there was no immediate sign that the attacks overnight Sunday and early Monday morning were having any impact on daily life in Sao Paulo, a metropolis of 18 million.