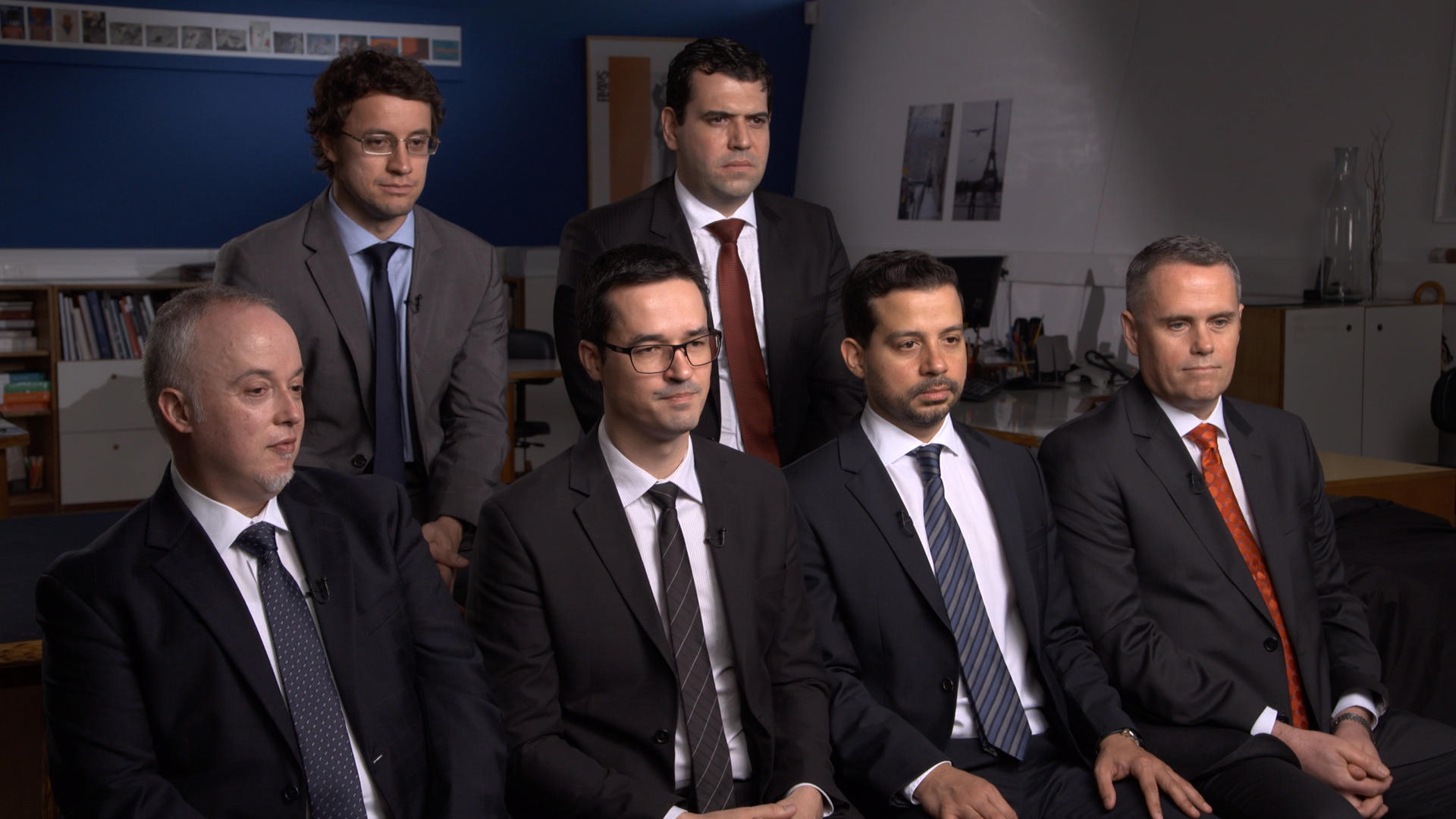 Imagine if the Watergate investigation had led not only to the downfall of President Nixon, but also to allegations against his successor, plus the Speaker of the House, the leader of the Senate, a third of the cabinet, and more than 90 members of Congress. That gives you some idea of what's happening in Brazil right now. The country's stock market plunged this past week after a report that President Michel Temer had been caught on tape approving illegal pay-offs, a potentially impeachable offense. Brazil's last president, Dilma Rousseff, was impeached.

The country is suffering through one of its worst recessions in history and a crisis of leadership caused in large part by a massive corruption investigation. It's known as Operation Car Wash. It's one of the largest bribery cases ever investigated, and it's being led by a small group of idealistic young Brazilian prosecutors and a crusading judge.

"We already have charged more than 200 people for hundreds of crimes. The amount of bribes paid go up to about two billion dollars."

In Curitiba – a city far from the ruling elites of Brasilia and Sao Paulo – a small band of prosecutors is working long hours in cramped quarters on the biggest investigation Brazil has ever seen -- Operation Car Wash.

Anderson Cooper: How does Car Wash compare to Watergate?

Deltan Dallagnol: Car Wash is much, much bigger.

Deltan Dallagnol is the lead prosecutor.

Deltan Dallagnol: We already have charged more than 200 people for hundreds of crimes. The amount of bribes paid go up to about two billion dollars.

The prosecutors say Brazil's popular former president, Luiz Inacio Lula da Silva, was the mastermind of the scheme and they've charged him with corruption and money-laundering. The country's current president, Michel Temer, has been implicated and there are now calls for his impeachment.  The once powerful leader of the lower house has been sentenced to 15 years in prison. Thirty-four senators and 62 representatives are under investigation.

Operation Car Wash also played a role in the downfall of a sitting president, Brazil's first female leader, Dilma Rousseff. She was impeached in August for some technical violations of budget rules. Rouseff wasn't charged with corruption, but for seven years she'd been the chairwoman of the state-controlled company at the center of the investigation, and that contributed to the public anger that led to her ouster.

We interviewed Rousseff three weeks after she was impeached.

Anderson Cooper: Did you ever receive any bribes?

Dilma Rousseff: No. And that's their problem when it comes to me: I never received any bribes. I am not charged with receiving bribes, I don't have any bank accounts abroad.

Anderson Cooper: I do think for some people, though, it's hard to believe that, as the chairwoman, you wouldn't have known something was going on.

Dilma Rousseff: Let me tell you, I did not know.

It all began here -- at a service station in the country's capital – which is why it's called Operation Car Wash. This is where federal police found their first clues four years ago – and the trail that led to this man: Paulo Roberto Costa, a former top executive at the government-controlled oil company, Petrobras.  Petrobras was Brazil's largest and most important company, responsible for exploiting the country's vast oil reserves. The police found evidence Costa had accepted a bribe, and under pressure from investigators, he decided to talk, revealing that for years senior Petrobras managers and ruling politicians had been robbing the company -- and the country -- blind.

Anderson Cooper: When Paulo Roberto Costa gave testimony in your court what was that moment like?

Judge Sergio Moro: Oh that was the point of no return maybe.

Sergio Moro is the judge in Curitiba who oversees Operation Car Wash.

Anderson Cooper: The point of no return?

Judge Sergio Moro: Yes, it was like that movie, "The Untouchables."

[From the "The Untouchables"]

Sean Connery: If you walk through this door now, you're walking into a world of trouble and there's no turning back. You understand?

Kevin Costner (as Elliot Ness): [cocking shotgun] Yes, I do.

Like Elliott Ness in "The Untouchables," Judge Moro has become something of a folk hero. Brazilians have had to put up with corruption for decades, and when Judge Moro and prosecutors began bringing the extent of the corruption to light, people poured into the streets to show their support, many wearing Judge Moro shirts and masks. The investigation became so popular there's a bumper sticker that says, "I support lava jato," which means car wash in Portuguese.

The fight against corruption has often been a losing battle in Brazil. Judge Moro says one reason Operation Car Wash has been successful is that it's used U.S. style-plea bargaining to get some defendants to cooperate.  Judge Moro and the prosecutors have also been willing to use controversial tactics to fight financial crime.

When former Petrobras executive Paulo Roberto Costa implicated others in 2014, Judge Moro sent them to jail before trial.

Twenty top executives from eight major companies were held without bail for months.

Judge Sergio Moro: I understood that we were living in exceptional circumstance because the corruption was so widespread. And you need to do something big to to stop it.

Paulo Galvao: This had never happened in Brazil.

Prosecutor Paulo Galvao told us the arrests were a turning point.

Paulo Galvao: These are the people that had never been afraid of the law in Brazil. This was the moment when these people started to see that they too were being targeted by Car Wash Operation.

Soon prosecutors were getting offers from frightened executives and politicians willing to cooperate and return money in order to avoid doing time.  nd the sums that had been stolen were astronomical:  Costa returned $23 million dollars he'd hidden in Swiss banks. It was the largest recovery in Brazil's history.

That is, until this former Petrobras executive, Pedro Barusco, offered to return a whole lot more.

Deltan Dallagnol: He said that he had money abroad. And then somebody asked him, "Oh, how many-- how much money do you have abroad?" And he said, "$97 million and-- "

Deltan Dallagnol: Yeah, yeah. It was too high a figure, for us to imagine.

In some cases Petrobras executives laundered their money by buying artwork. Police have confiscated so much art they've mounted a show for the public at this museum in Curitiba. The paintings may differ stylistically but many share a common theme: they once hung on the walls of a Petrobras executive now serving time in prison.

If you're wondering how they got so much money out of a national oil company without anybody noticing, what happened with the building of the Comperj refinery, 30 miles east of Rio, is a good example. The multi-billion-dollar project was supposed to create more than 100,000 jobs.  But today the refinery sits unfinished -- billions over budget, its future in doubt. The people who moved here for jobs had to wait on food lines instead.  Former Petrobras executives now admit they allowed the cost of building the refinery to be hugely inflated by a cartel of construction companies. The construction companies then paid kick-backs to Petrobras executives and the politicians and political parties that got them their jobs.

Deltan Dallagnol: It was rule of the game.

Carlos Lima: It was the way politics in Brazil gets financed.

Anderson Cooper: You believe this was a scheme of politicians who basically saw this company as a way to maintain power?

Paulo Galvao: That's exactly what-- the way we see it. And in fact we can see that the same scheme happened in other major state companies in Brazil.

In Eecember, the prosecutors made one of their biggest breakthroughs yet.  Brazil's largest construction company, Odebrecht, acknowledged its role in the bribery scheme and agreed to pay billions of dollars in penalties.  Odebrecht was a key member of the cartel of construction companies that secretly inflated the cost of Comperj and other big projects. Company executives now admit they had an entire unit that served as their "bribe department."

As part of a deal made with prosecutors, the company's imprisoned CEO and 76 other executives have given testimony against the politicians they've been bribing for more than a decade.  Odebrecht also admitted paying hundreds of millions of dollars to win business in 12 other countries, including Argentina, Peru, Ecuador, Colombia, Venezuela, Panama, Guatemala and Mexico. The U.S. Department of justice has called it, "the largest foreign bribery case in history."

Anderson Cooper: You're threatening very powerful people. Do you ever feel at risk for your safety?

Paulo Galvao: It's a different kind of risk. We don't feel personal threats in terms of safety, security. However,we are always facing the risk of being exposed of criticism to the investigations, to the investigators. So they are always trying to say that we are abusing.

Former president Lula is among those who have criticized the prosecutors and Judge Moro, accusing them of violating defendants' civil rights.  Lula has been considering another run for the presidency in 2018, and in his first appearance in Judge Moro's courtroom two weeks ago.

He told Judge Moro he thought the charges against him were politically motivated – a notion the judge rejected when we spoke with him in September.

Judge Sergio Moro: Nobody will be tried in court because of his political opinion. Former President Lula will have all the opportunities that our law gives to him to present his defense.

The government that replaced Dilma Rousseff's got off to shaky start. Three ministers were forced to resign in the first month. The planning minister was caught on tape planning to undermine the Car Wash investigation. The Transparency minister was caught giving advice how to avoid transparency. As for the Tourism Minister, he was just accused of tax evasion and money laundering.

Things have only gone downhill from there.  Last month, Brazil's Supreme Court authorized new investigations of nearly 100 politicians, including a third of the new President Michel Temer's current cabinet. And this past week, the Supreme Court authorized an investigation of President Temer himself and released audiotapes in which he allegedly approved payments that were designed to buy the silence of a witness. President Temer denies the allegations.

In Congress, some legislators under investigation have been fighting back, trying to pass new laws to protect themselves and curb the power of prosecutors and judges, threatening the very future of Operation Car Wash.

Anderson Cooper: There's a lotta powerful interests who would like to see all of this go away.

Judge Sergio Moro: Yes. But it's our responsibility to don't allow them to do that. We have to face the problem. And facing it I think we have-- have a better country.