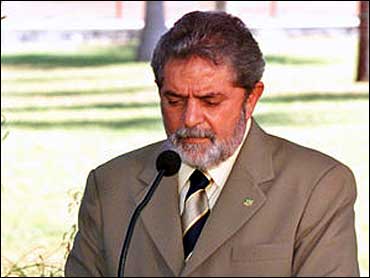 Brazil's government expelled a New York Times correspondent over a story alleging that the country's president had a drinking problem, but denied Wednesday that its decision was an attack on press freedom.

The decision to revoke the visa of Larry Rohter and give him eight days to leave the country because of his story on President Luiz Inacio Lula da Silva marked the first time since the 1964-1985 military dictatorship that a reporter has been expelled.

"This is not about freedom of speech. It's about story that is libelous, injurious and false," said Foreign Minster Celso Amorim. "We never acted against anyone who criticized Brazil's internal or foreign policy but it is another thing to offend the honor of the chief of state."

The decision to revoke the visa set off a firestorm of criticism Wednesday among the government's opponents and even many allies.

Rohter's lengthy article in the Sunday edition of The New York Times, entitled "Brazilian Leader's Tippling Becomes National Concern," summed up a series of rumors that had long been circulating among journalists in the nation's capital.

But many Brazilians thought the article suffered from weak sourcing. It cited a former ally-turned enemy of Silva and two partisan columnists to support the thesis that the president's drinking had become a national concern.

"The president has often stayed out of the public eye and left his advisers to do most of the heavy lifting," Rohter wrote. "That has spurred speculation that his apparent disengagement and passivity may somehow be related to his appetite for alcohol."

The rival politician told Rohter he was worried the president was "destroying the neurons in his brain."

Roberto Abdenur, Brazil's ambassador to the United States, wrote in a letter to the Times editor on Monday that "one would expect any serious journalist to indicate reliable local sources or solid local media coverage in support of such an assertion, certainly not what the reporter himself expressly refers to as 'speculation,' 'innuendo' and 'stories.'"

The story, however, paled in comparison to the debate over the decision to expel Rohter.

The last time a foreign journalist was expelled from Brazil was in the 1970s, during the military dictatorship.

"It's a political mistake, the government managed to transform a victory into a defeat, it went from victim to villain. There is no precedent for this during democracy," said Sen. Jefferson Peres of the left-leaning Democratic Workers' Party.

He added that "the article was badly done but that doesn't justify the government's decision which is authoritarian."

Even members of Silva's own party seemed uneasy with the decision.

"The reaction was disproportionate," Sen. Paulo Paim of the Workers' Party said.

Bill Keller, executive editor of The New York Times, said in a statement that if Brazil "intends to expel a journalist for writing an article that offended the president, that would raise serious questions about Brazil's professed commitment to freedom of expression and a free press."

No one could be reached at The New York Times office in Rio.

Rohter's whereabouts were not immediately known. His office had earlier said he was out of the country.

It was not immediately clear whether Rohter, who is married to a Brazilian, would be prevented from re-entering Brazil if he was outside the country

According to the Committee to Protect Journalists, Brazilian journalists enjoy legal press freedoms but "have increasingly been targeted with defamation lawsuits that seek to silence them."

"Judicial interference and censorship, under the guise of protecting privacy and honor, continues unabated," CPJ said.