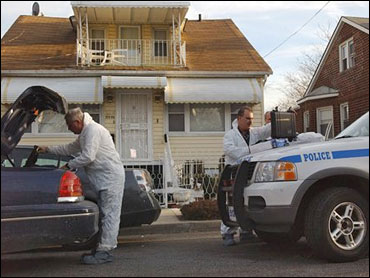 The Houston Astros provided one final thrill at the Astrodome. It wasn't enough to keep the Atlanta Braves from advancing to another NL championship series.

John Smoltz pitched seven strong innings before the Braves withstood a furious rally by the Astros, moving on to their eighth straight LCS with a 7-5 victory over Houston on Saturday.

The Astros trailed 7-0 before closing the gap with a run in the seventh and four more in the eighth, actually bringing the tying run to the plate. But John Rocker got the final four outs for a save retiring Ken Caminiti, who had homered earlier, on a deep fly with a runner on base to end it.

"It was a little scary," Chipper Jones said. "But Rocker was up to the challenge. He made some big pitches."

A crowd of 48,553, about 6,000 short of capacity, watched the last game at the Astrodome, dubbed the Eighth Wonder of the World when it opened in 1965. Houston is moving to a new downtown park next season after 35 years at the world's first domed stadium.

Manager Larry Dierker is glad to make the move. The Astros have never won a postseason series, so maybe a change of scenery will help.

"The greatest pleasure for me is knowing we won't have any more games here," Dierker said. "I keep saying I'm not going to go to a World Series until we're in it. I hope I live long enough."

The LCS begins Tuesday night at Turner Field. The Braves will meet the New York Mets, who beat Arizona 4-3 in 10 innings Saturday to win their series, also 3-1.

"We obviously know we can beat them," Jones said. "We need to go out and play them the same way we have all season. To win nine of 12 is pretty good against a club of that caliber."

Atlanta took control of its first-round series with a thrilling 5-3 victory in 12 innings Friday, escaping from the edge of defeat in the 10th when shortstop Walt Weiss made a brilliant defensive play and the Astros couldn't score against Rocker with the bases loaded and no outs.

In Game 4, the Astros loaded the bases in the first and put two runners on in the second against Smoltz, but failed to score either time. Houston finally came through with some clutch hits in the eighth when Caminiti hit his third homer of the series, a three-run shot over the center-field fence.

Tony Eusebio followed with a single and came around to score on Tim Bogar's third hit of the game, a double to the gap in left-center. But Kevin McGlinchy and Rocker ended any hope of a storybook finish for the Astrodome.

"I knew it wasn't do or die for us," said Rocker, who picked up the win in Game 3. "I knew we still had a Cy Young guy (Greg Maddux) going tomorrow. I just tried to relax, go out there and get it done."

Houston couldn't overcome its history of playoff failure. The Astros have been to the postseason six times without ever winning a series, also losing to the Braves in the opening round two years ago.

The division series has never been much of an obstacle for the Braves, who have an overall record of 15-2 since the expanded playoffs began in 1995 including 8-0 on the road. They won three in a row after losing the first game in Atlanta, 6-1.

For the third year in a row, the Killer B's Craig Biggio and Jeff Bagwell were big zeros in the postseason. Biggio went 2-for-19 in the series and has a career average of .119 in the playoffs, while Bagwell's 2-for-13 performance dropped him to .128 for his postseaso career.

Biggio, one of Houston's most popular players, was booed loudly after he struck out swinging to lead off the fifth, chasing a high pitch. He also struck out against Rocker with a runner on third to end the eighth.

After giving up a leadoff walk to Stan Javier in the ninth, Rocker struck out Bagwell, too.

The Braves sent up 10 batters in the sixth, pecking Houston into submission with seven singles against Game 1 winner Shane Reynolds and two relievers. Eddie Perez and Gerald Williams each had two-run hits and Andruw Jones drove in the other run, sending thousands in the crowd toward the exits.

Smoltz lost his shutout in the seventh when Eusebio led off with a homer. The Atlanta starter allowed six hits and four runs, failing to get an out in the eighth.

Two years ago, Smoltz went the distance in the deciding Game 3 against the Astros, allowing only three hits and a run while striking out 11.

Gerald Williams doubled on the first pitch of the game and came home on Chipper Jones' sacrifice fly, giving the Braves a 1-0 lead.

Atlanta added another run in the third when Smoltz led off with a double, moved to third on a sacrifice bunt and scored on Bret Boone's single to left. Smoltz also singled in the fifth and had a sacrifice bunt in the sixth.

Reynolds, working on three days' rest for only the second time this season, was lifted in the fifth after giving up two hits. Reliever Chris Holt failed to get an out, the Braves adding three more hits, and Scott Elarton gave up Williams' two-run single before the inning mercifully ended for the Astros.