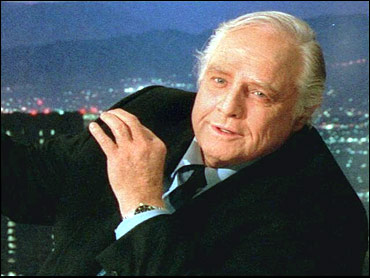 Marlon Brando started his screen career as a muscular leading man, and ended it as ... an elderly woman. The actor's last role was a voice performance for the animated comedy "Big Bug Man," about a candy factory worker (Brendan Fraser) who gets superpowers after insects bite him. The film is set for release in 2006.

Brando voices Mrs. Sour, the candy company's owner — and he did it wearing a blond wig and a dress, with full makeup and white gloves, according to writer/co-director Bob Bendetson.

"He was gorgeous," Bendetson said. "I guess it was part of his Method training or something, where you almost embarrass yourself as the character, so that way you're free to be the character. ... About halfway through he took off the wig because he was getting too hot."

As anyone who saw the 1976 Western "The Missouri Breaks" knows, it wasn't the first time Brando was in drag. His hired-gun character unforgettably wore a pinafore and bonnet. In 1996's "The Island of Dr. Moreau," Brando also overdosed on make-up with a performance buried under layers of white Kabuki-style face paint.

"I think part of it was that he just liked to mess with people," Bendetson said. "He did like to be playful, but I think the other part was he thought this would just help his character."

Bendetson, formerly of "The Simpsons," said he originally approached Brando for the role of a money-grubbing 600-pound man who runs the candy factory on the cheap.

It turned out to be an offer "The Godfather" star COULD refuse.

Brando, who also starred in "A Streetcar Named Desire" and "On the Waterfront," thought it would be fun to voice the old lady instead — and she was only in three scenes. He needed just one day to record the voice for the short, slack-breasted, blond character, who has a cascade of wrinkles for a mouth.

"I was told by his agent and manager that it was always a dream of his to play a woman in an animated movie. For some reason, that was his dream," Bendetson said.

"It was recorded in his home. In the last year of his life he was pretty frail, he was on oxygen six hours a day and didn't want to leave his home, or felt he couldn't. So we brought the recording crew up there and recorded in his bedroom as he sat on his couch."

The director wouldn't say what he paid Brando, who died July 1 at 80, but said he did bring him special treats on June 10, the day they recorded.

"He didn't want to be treated like an icon. When you dealt with him you had to talk to him like a regular guy, he was very anti-Hollywood. But then the other part of him," Bendetson said, "he wanted a little gift to be brought ... It was Persian caviar, imported cheeses and red wine. He loved it."