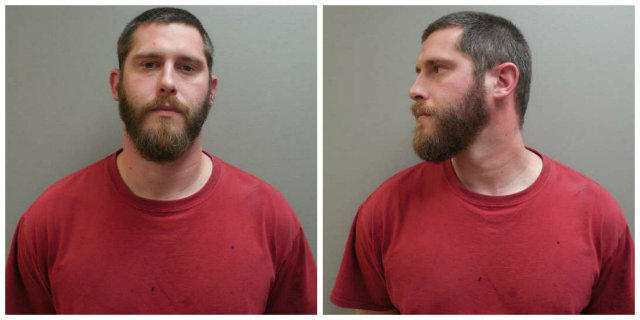 PAULDING, Ohio -- Federal officials joined local authorities on Sunday as the search continues for an Ohio rape suspect who overpowered a sheriff's deputy in a transport van, stole his gun and ammunition and fled.

Paulding County Sheriff Jason Landers said Sunday that authorities, including the FBI and U.S. Marshals, were working around the clock to find 32-year-old Branden Lee Powell, who escaped around noon Friday on an 80-mile trip from a psychiatric hospital in Toledo to the Paulding County Jail in northwest Ohio.

According to Landers, Powell was in leg shackles and in handcuffs secured to a belly belt when he jumped over the seat and put the deputy in a headlock, causing the van to crash into a ditch. Powell managed to get the deputy's gun during a struggle and ordered the deputy at gunpoint to remove his restraints.

Powell then handcuffed the deputy to the steering wheel and disabled the van's police radio and engine before fleeing with the deputy's wallet, cellphone, gun and 30 rounds of ammunition, Landers said.

There was no mesh or other barriers separating the front and back of the van. They will be added, Landers said.

On Sunday, Landers expressed frustration over the whole incident, according to CBS affiliate WANE-TV in Indiana.

"I'm angry with myself," he said. "I take accountability for my office and the actions of my office. There's a couple of things I know could have prevented this issue from happening that are changes that we'll put in place immediately administratively."

Powell was jailed July 8 and subsequently indicted on rape, attempted rape and sexual battery charges for an alleged assault in the Paulding County village of Antwerp. After being jailed, Powell slit his throat in a suicide attempt and underwent surgery at a hospital, Landers said. He was sent to Northwest Ohio Psychiatric Hospital on July 13.

Doctors at the psychiatric facility "obviously concluded he was fit for incarceration in our facility," Landers said.

Officials say that Powell is considered armed and dangerous. A $2,000 reward has been offered for information leading to the capture of Powell, WANE-TV reports.

The station also writes that the search for Powell has included a helicopter, K-9 officers and other specialized tools.

Landers asks the public to remain vigilant and call 911 immediately if they see Powell or anything suspicious. Tips can also be sent to the sheriff using the email jklanders@pauldingohsheriff.com.