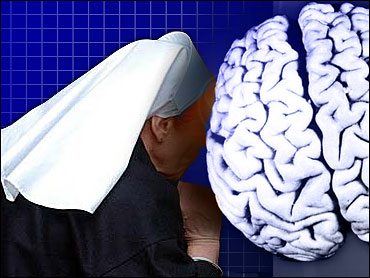 Mystical experiences may engage several areas of the brain, not just one "God spot," a new study shows.

The study, published in Neuroscience Letters, comes from Mario Beauregard, Ph.D., and Vincent Paquette, M.Sc. They work at Canada's University of Montreal.

Other researchers have suggested there might be one key part of the brain involved in spiritual experiences, note Beauregard and Paquette.

To test this theory, the Canadian researchers turned to 15 Carmelite nuns — and to high-tech brain scans.

The nuns set a few ground rules for the researchers.

"The nuns told us before the onset of the study that 'God can't be summoned at will,'" write Beauregard and Paquette.

So the scientists didn't ask the nuns to try to get in touch with God during the brain scans.

Instead, the nuns had their brains scanned as they recalled their most intense mystical experience — defined as a sense of union with God — since joining the Carmelite order.

For comparison, they also got brain scans while remembering their most intense experience with another person since taking their vows, and while simply resting with their eyes shut.

The researchers had asked the nuns to practice summoning up those memories in the week before the brain scans.

The researchers interviewed the nuns after their scans.

In their research, Beauregard and Paquette weren't trying to prove or disprove God's existence. The study doesn't "confirm or disconfirm the existence of God," Beauregard says in a University of Montreal news release.