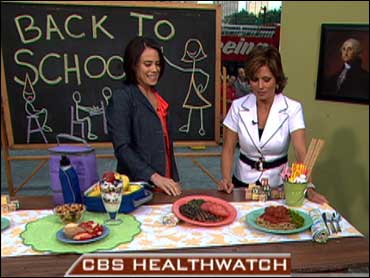 It's back-to-school time, and you're headed out to buy school supplies. But, what about the supplies that will really help keep your kids' minds as sharp as possible?

Eating the proper foods will help ensure your kids success throughout the day!

On The Early Show Thursday, contributor and registered dietician Keri Glassman explained the ABCs of eating smart to fuel the mind as well as the body.

Studies show children who start their day with a healthy breakfast do better academically and have fewer behavior problems.

If a child doesn't eat breakfast, he or she may become tired, irritable, restless, and fail to focus on academics or behave appropriately.

A study done at Tuft's University reinforced the belief that breakfast improves children's academic performance. The researchers divided the children into two groups. One group was fed instant oatmeal (a complex carbohydrate containing fiber and protein), and the other dry, readymade cereal (lower in fiber, higher in sugar). The results showed kids fed the oatmeal did better on special and short-term memory tests, as well as auditory attention tests.

Breakfast foods for the brain: