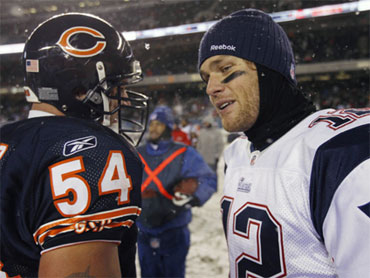 Tom Brady threw for 369 yards and two touchdowns as the New England Patriots locked up their eighth playoff berth in 10 years with a 36-7 pounding of the Chicago Bears on a snowy, blustery, bone-chilling Sunday.

The win was the fifth straight for the Patriots (11-2), and this one was no less impressive than their 45-3 rout of the New York Jets on Monday night.

Brady completed 27 of 40 passes and went without an interception for the eighth straight game.

At Detroit, Drew Stanton threw a 13-yard touchdown pass to Will Heller midway through the fourth quarter as Green Bay couldn't come back without an injured Aaron Rodgers in Detroit's win.

Detroit (3-10) snapped a five-game losing streak and a 19-game skid against the NFC North, the NFL's worst slump within a division since the merger four decades ago.

At Arlington, Texas, DeSean Jackson had 210 yards receiving, including a 91-yard, go-ahead touchdown early in the fourth quarter as Philadelphia beat Dallas.

Philadelphia (9-4) ended a three-game losing skid to its NFC East rival and moved a half-game ahead of the New York Giants in the division race. The Eagles will take a streak of five wins in six games to New York on Sunday for a showdown with the Giants.

The Jaguars overcame a 10-point deficit to win for the fifth time in the last six games, setting up a critical AFC South game at Indianapolis next week.

The Buccaneers improved to 8-5 and broke a two-game losing streak. It was also the fifth time this season Josh Freeman has won a game with a fourth-quarter comeback. He hit Kellen Winslow for a 41-yard scoring pass with 3:47 to play.

The Steelers (10-3) couldn't get into the end zone on offense despite dominating time of possession — a 9 1/2-minute drive produced no points — but it didn't matter as they closed in on a playoff spot by playing well enough to beat the Bengals (2-11).

Rian Lindell hit field goals of 30 and 19 yards to help the Bills (3-11) snap a three-game losing streak against Cleveland.

At Charlotte, North Carolina, Michael Turner ran for 112 yards and three touchdowns, and Matt Ryan threw for another as Atlanta held onto the best record in the National Football Conference.

The Falcons (11-2) built a 17-0 halftime lead, survived a brief hiccup to start the third quarter, and cruised to their seventh straight win. John Abraham and Kroy Biermann each had two sacks as the Falcons became the latest team to shut down the NFL's worst offense.

At San Francisco, Alex Smith threw for 255 yards and three touchdowns in a triumphant return to the starting lineup following a five-game absence as San Francisco improved its playoff hopes.

The Niners muddled up the ugly West race even more with a surprisingly lopsided win.

San Francisco (5-8) moved within a game of division leaders Seattle (6-7) and St. Louis. The 49ers looked much more like the team that was predicted to win the division after an unbeaten preseason.

At East Rutherford, New Jersey, the Miami Dolphins turned two early turnovers into their only points in winning at the rainy Meadowlands.

Much of the game was played in a downpour, which made for inept offense in the sloppy conditions. The Dolphins gained 132 yards, with Chad Henne passing for only 55, yet improved to 7-6.

The frustration on the Jets sideline boiled over in the third quarter when Sal Alosi, New York's strength and conditioning coach, tripped Miami's Nolan Carroll while the rookie was covering a punt.

Alosi could face discipline from both the team and league.

"I made a mistake that showed a total lapse in judgment," Alosi said in a statement a few hours after the game.

At New Orleans, Drew Brees threw for three scores and Malcolm Jenkins returned one of his two interceptions 96 yards for his first career touchdown as New Orleans won its sixth straight game.

Marques Colston had a pair of touchdown catches in traffic as New Orleans (10-3) raced to a 14-0 lead and never trailed. Lance Moore made a 31-yard touchdown catch.

The Chiefs played without quarterback Matt Cassel, who didn't travel after having an emergency appendectomy Wednesday.

At Glendale, Arizona, Jay Feely became the fourth kicker in 40 years to run for a touchdown and added a career-best five field goals to help Arizona end a seven-game losing streak.

Arizona rookie quarterback John Skelton completed 14 of 36 for 141 yards with no interceptions and had at least four passes dropped in his first NFL start.