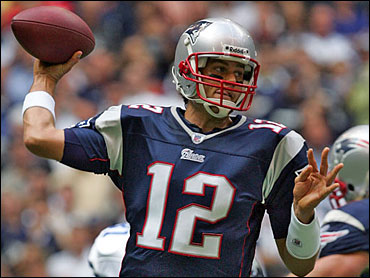 A day that started badly for Tom Brady turned out to be a pretty good one after all.

After a morning crash left Brady's car damaged but the New England Patriots quarterback unhurt, he came to terms on a contract that will make him the highest paid player in the NFL.

Two people with knowledge of the contract said Thursday night that Brady has agreed to a four-year extension beginning in 2011.

It has a value of $18 million per year with a total of $48.5 million guaranteed, one of those persons said. Both persons spoke on condition of anonymity because the paperwork had not yet been filed with the NFL.

Brady is making $6.5 million this season in the final year of a six-year deal.

The extension was first reported by Peter King of Sports Illustrated during halftime of NBC's telecast of the Minnesota-New Orleans game.

Peyton Manning is in the final year of a seven-year, $98 million deal ($14 million average) and Indianapolis Colts owner Jim Irsay said he intends to make his quarterback the NFL's highest paid player.

Brady's contract differs from those two deals in that it pays him a higher average salary over a shorter period of time. He has said he would like to play 10 more seasons. He is currently playing under a four-year extension with an average value of $12 million that he signed with two years left on his previous deal.

Brady's new agreement, which expires when he will be 37, came on a day in which the black Audi being driven by the two-time Super Bowl MVP was involved in a two-car crash near his home in Boston's Back Bay. Police responded to the scene at about 6:30 a.m. after reports of an accident, police spokeswoman Elaine Driscoll said.

The 21-year-old driver of a red minivan involved in the crash, Ludgero Rodrigues, was cited Thursday for failing to stop at a red light, based on witnesses statements, police said. Two other people were able to exit the minivan and had no visible injuries, they said.

The police report, which did not name Brady, said the driver of the Audi had no visible injuries and was evaluated by Emergency Medical Services. It said a 49-year-old passenger had to be freed with the Jaws of Life and was taken to a hospital.

Brady wasn't hospitalized and went to Gillette Stadium where he took part in a walkthrough practice at about 10:45 a.m. At the full practice starting shortly after 1 p.m., he stretched with his teammates, threw passes and participated in the entire session in full uniform.

The Patriots begin their season Sunday at home against the Cincinnati Bengals.

Brady has had a strong exhibition season after throwing for 4,398 yards, second-most in his career, in 2009. His 28 touchdown passes tied for second in his career. That followed a 2008 season in which he suffered a season-ending injury to his left knee in the opener. He played late last season with finger and rib injuries but appeared healthy since the team began training camp in late July.

The Patriots drafted Brady in the sixth round out of Michigan in 2000 and he has been the starter since the third game in 2001 after Drew Bledsoe was injured. Brady was named MVP of the Super Bowl that season and in the 2003 season. He also was part of the team that won the championship after the 2004 season.

In 2007, he was named MVP of the NFL when the Patriots were 18-0 before losing the Super Bowl 17-14 to the New York Giants on a last-minute touchdown.