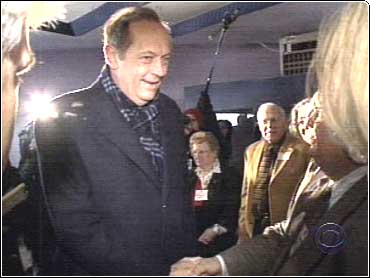 Al Gore touched down in Iowa Thursday to a wave of support, showing the confidence of a candidate expecting to win the first presidential nominating contest in a walk, CBS News Chief White House Correspondent John Roberts reports.

For Bill Bradley, who lags 20 points behind Gore in the most recent polls here, the goal is not to lose so badly that it takes the wind out of his sails in New Hampshire.

So Bradley is turning up the heat. On Thursday, he painted Gore as a nibble-around-the-edges policy wonk who lacks bold vision. Bradley said he'd be a very different kind of leader.

"It boils down to being willing to tackle big problems with big solutions," said the former New Jersey senator.

But while attacking Gore, Bradley also offended many Iowa voters by saying the caucuses reward entrenched power. The vice president jumped on an irresistible opportunity to defend his record.

"Fighting to save the family farm is not entrenched power," said Gore. "That's about fighting for people."

With his poll numbers in Iowa and New Hampshire strengthening, the vice president is showing new-found self-assurance.

"I want to be your next president cause I want to fight for you," Gore shouted during a speech Thursday.

Bradley's handlers are hoping to use Gore's confidence against him, claiming his attitude has gone from that of humble underdog back to inevitable nominee. Bradley plans to lean on that issue next week, hoping that the idea of a coronation will turn off independent-minded voters in New Hampshire.