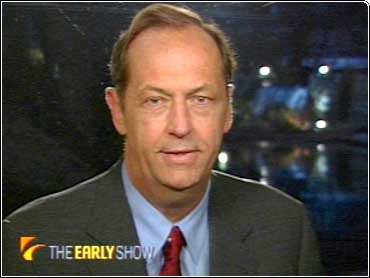 Pushing for racial healing, Democrat Bill Bradley told a group of schoolchildren Monday that their generation can "blow away the acrid odor of race discrimination."

With the help of NBA Hall of Fame center Bill Russell, Bradley spoke to about 150 elementary and high school students at a Martin Luther King Jr. forum at Drake University. While many students craned their necks at reporters and squirmed in their seats, Bradley challenged them to become leaders in racial understanding.

"It is your generation that can blow away the acrid odor of race discrimination and racial misunderstanding," Bradley said. "Some people say you'll never do that. I'm absolutely banking my whole political life on the fact that that's possible."

Bradley has campaigned for improved race relations and vowed to set a "tone in my administration" that would value diversity and racial understanding.

The former NBA Hall of Fame basketball player also took questions from students during the 40-minute forum. One student asked him why there hasn't been a black president and Bradley urged the student to be the first.

"You know something? There will be. Why don't you shoot for it?" Bradley said.

"Think about that. All you have to do is make sure you do well in school," he advised, adding: "You look presidential."

"It offends me," Bradley said. "It should be taken down immediately ... and we should move forward and not look back."

Russell, who won 11 NBA titles with the Boston Celtics, recalled that Bradley's New York Knicks teams of the early 1970s included "diverse personalities" that gave him a unique perspective on race relations.

"The sum was greater than the parts and that's what I think Bill envisions for this country," Russell said. "So that we can take all the diversity and make it our greatest asset."