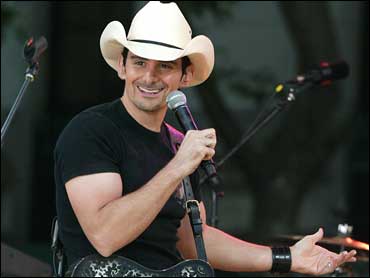 Brad Paisley plans to take it easy this Father's Day, the first time he will celebrate it as a Dad.

"I'm going to sit around and let them cater to me for one day out of the year. I have a feeling that won't work, but I'm going to try it," says Paisley, who along with his wife, actress Kimberly Williams-Paisley, welcomed son Will in February.

Life has been non-stop since little Will entered the world. The multi-platinum country star has been on the road with his "Bonfires and Amplifiers" tour, which kicked off April 26. He's been getting ready for the release of his new album, "5th Gear," which debuts next week, and he's been psyching himself up for his first concert special, which premieres this month.

"We're having a ball out on the road so far," Paisley says of the tour, which hits a slew of U.S. cities and wraps on August 23 in Minnesota. "5th Gear," includes a track with Grammy-winner Carrie Underwood and has been well-received.

"There's a real up-tempo feel to a lot of these songs," he says of the album. "There's a lot of references to cars and your first car … it felt like the kind of record that had that aggressive driving, put the top down and listen to it, cranked up kind of feel."

Not that Paisley himself will be engaging in any of that aggressive kind of driving. Fatherhood, he says, has changed him in several ways.

"I don't take the risks I used to take, because you feel that sense of responsibility in a greater sense … (I) drive a little more careful. You try your best to make it home every night safely, it's funny but I feel that when I'm out on the interstate," he says.

Fans can get an inside look at Paisley's tour when the special, "Brad Paisley 5th Gear," airs on GAC on June 17.

Paisley is proud of the special. "It's nice to be able to show it to people who haven't even been to it yet," he says. "Most (specials) happen when it's over and it's too late to see it. In this case, if you've already bought a ticket and you're coming to the show, you get a chance to see a little bit of what to expect."

Paisley says trekking across country performing his songs and devoting time to his family is a balancing act.

"I feel like it's just a matter of taking everything as it happens. When you got something you gotta do in your career, you do it. When you get home and there's work to be done, you do that. It's all about balance," he says. "At certain times in your life, some things are heavier than others. And right now I just happen to have a pretty good dose of everything happening at once. And that's ok."

Although traveling is a part of the business, Paisley makes his way home as often as he possibly can. Being away, he says, is the hardest part of being a performer.

"It's one thing being away from somebody that you love. But a child, especially this new, it's hard to leave," he says. "Unfortunately, the way I make the most money is to go out there on the road and play these songs, so it's a Catch-22."

When he gets home he automatically accepts another job: diaper duty. "I end up having to pay for having to go away," he jokes. "I pay by being in the line of fire."