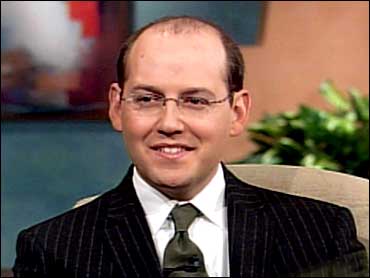 Brad Meltzer's love affair with Washington began when he was a 19-year-old intern for the Senate Judiciary Committee. But, instead of going into law or politics, he began working at his first love - writing. And his fans love his books, all six million in print.

In his new thriller, "The Zero Game," Meltzer takes us behind the scenes in the nation's capital in a tale of a game turned deadly.

He tells The Early Show co-anchor Hannah Storm, "I love D.C. I think there is so much power in so few people. I love not only the power you see but also the power you don't."

What fascinates him as well is the structure of the buildings like, "the underground labyrinth that's below the capitol, the secret tunnels nobody knows about and the hidden rooms. That, to me, is the most fascinating stuff. I love to put it in the book and its always what makes it more interesting."

The premise of the book is about two college buddies, both staffers on Capitol Hill who are so bored they start betting on bills.

Meltzer explains, "'The Zero Game' is a secret game that's being played on Capitol Hill that nobody knows about, right under the noses of the most powerful senators and congressmen. What's happening is the staffers are literally betting on bills: 'I bet I can get 20 votes.' 'I bet I can get 30.' 'I bet you can't.' The Zero Game is on. What happens is when high money bets go awry, the two staffers realize they're not only players, but pawns. That's where it begins."

Meltzer is known for doing extensive research before writing his books. "The Zero Game" is filled with anecdotes about the antics of members of Congress and their staffs.

"The whole thing about the book is that all the bets, all the jokes - everything is real. That's what makes the book so much fun," says Meltzer. In the introduction, Meltzer quotes P.J. O'Rourke: "...the real problem is that government is boring." He says that staffs have to do something to keep it interesting.

I DON'T BELONG HERE. I haven't for years. When I first came to Capitol Hill to work for Congressman Nelson Cordell, it was different. But even Mario Andretti eventually gets bored driving two hundred miles an hour every single day. Especially when you're going in a circle. I've been going in circles for eight years. Time to finally leave the loop.

"We shouldn't be here," I insist as I stand at the urinal.

"What're you talking about?" Harris asks, unzipping his fly at the urinal next to mine. He has to crane his neck up to see my full lanky frame. At six feet four inches, I'm built like a palm tree and staring straight down at the top of his messy black hair. He knows I'm agitated, but as always, he's the perfect calm in the storm. "C'mon, Matthew, no one cares about the sign out front."

He thinks I'm worried about the bathroom. For once, he's wrong. This may be the rest room right across from the Floor of the House of Representatives, and it may have a sign on the door that says, Members Only—as in Members of Congress . . . as in them . . . as in not us—but after all this time here, I'm well aware that even the most formal Members won't stop two staffers from taking a whiz.

"Forget the bathroom," I tell Harris. "I'm talking about the Capitol itself. We don't belong anymore. I mean, last week I celebrated eight years here, and what do I have to show for it? A shared office and a Congressman who, last week, pressed himself up against the Vice President to make sure he didn't get cropped out of the photo for the next day's newspaper. I'm thirty-two years old—it's just not fun anymore."

"Fun? You think this is about fun, Matthew? What would the Lorax say if he heard that?" he asks, motioning with his chin to the Dr. Seuss Lorax pin on the lapel of my navy blue suit. As usual, he knows just where the pressure points are. When I started doing environmental work for Congressman Cordell, my five-year-old nephew gave me the pin to let me know how proud he was. I am the Lorax—I speak for the trees, he kept saying, reciting from memory the book I used to read to him. My nephew's now thirteen. Dr. Seuss is just a writer of kids' books to him, but for me, even though it's just a trinket . . . when I look at the tiny orange Lorax with the fluffy blond mustache . . . some things still matter.

"That's right," Harris says. "The Lorax always fights the good fight. He speaks for the trees. Even when it's not fun."

"You of all people shouldn't start with that."

"That's not a very Lorax response," he adds in full singsong voice. "Don't you think, LaRue?" he says, turning to the older black man who's permanently stationed at the shoeshine chair right behind us.

"Never heard of the Lorax," LaRue responds, his eyes locked on the small TV that plays C-SPAN above the door. "Always been a Horton Hears a Who guy myself." He looks off in the distance. "Cute little elephant . . ."

Before Harris can add another mile to the guilt trip, the swinging doors to the rest room bang open, and a man with a gray suit and red bow tie storms inside. I recognize him instantly: Congressman William E. Enemark from Colorado—dean of the House, and Congress's longest-serving Member. Over the years, he's seen everything from desegregation and the Red Scare, to Vietnam and Watergate, to Lewinsky and Iraq. But as he hangs his jacket on the hand-carved coat-rack and rushes toward the wooden stall in back, he doesn't see us. And as we zip up our flies, Harris and I barely make an attempt to see him.

"That's my point," I whisper to Harris.

"What? Him?" he whispers back, motioning to Enemark's stall.

"The guy's a living legend, Harris. Y'know how jaded we must be to let him walk by without saying hello?"

"You can still say hello, right?"

Harris makes a face, then motions over to LaRue, who raises the volume on C-SPAN. Whatever Harris is about to say, he doesn't want it heard. "Matthew, I hate to break it to you, but the only reason you didn't throw him a Hi, Congressman is because you think his environmental record is crap."

It's hard to argue with that. Last year, Enemark was the number one recipient of campaign money from the timber, oil, and nuclear power industries. He'd clear-cut Oregon, hang billboards in the Grand Canyon, and vote to pave over his own garden with baby seal skins if he thought it'd get him some cash. "But even so, if I were a twenty-two-year-old just out of college, I still would've stuck my hand out for a quick Hi, Congressman. I'm telling you, Harris, eight years is enough—the fun's long gone."

Still standing at the urinal, Harris stops. His green eyes narrow, and he studies me with that same mischievous look that once got me thrown in the back of a police car when we were undergrads at Duke. "C'mon, Matthew, this is Washington, D.C.—fun and games are being played everywhere," he teases. "You just have to know where to find them."

Before I can react, his hand springs out and grabs the Lorax pin from my lapel. He glances at LaRue, then over to the Congressman's jacket on the coat-rack.

There it is. No lie. Harris's favorite turn of phrase—and the first sign of guaranteed trouble.

I flush my urinal with my elbow. Harris flushes his with a full-on grip. He's never been afraid to get his hands dirty. "How much will you give me if I put it on his lapel?" he whispers, holding up the Lorax and moving toward Enemark's coat.

There's a hollow rumble of spinning toilet paper from within the stall. Enemark's almost finished.

As Harris shoots me a smile, I reach for his arm, but he sidesteps my grip with his usual perfect grace. It's how he operates in every political fight. Once he's focused on a goal, the man's unstoppable...

Copyright © 2004 by Forty-four Steps, Inc. Excerpted by permission of Warner Books. All rights reserved. No part of this excerpt may be reproduced or reprinted without permission in writing from the publisher.