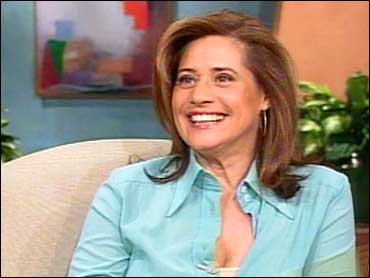 For five seasons, Lorraine Bracco has been helping New Jersey mob boss Tony Soprano work through his many conflicts in her role as psychiatrist Jennifer Melfi on HBO's hit series, "The Sopranos."

This season, the professional line between doctor and patient is blurred as Tony Soprano gives Dr. Melfi the big kiss that many "Sopranos" fans have been waiting for.

"Oh, God help me!" That's what she said when she first saw the script for that scene, Bracco tells The Early Show co-anchor Harry Smith. "Maintaining that doctor-patient line, I think it's very important. I mean, we've maintained it. I believe it should be maintained. And now she's got to deal with it being crossed."

Asked if Dr. Melfi enjoyed the kiss from Tony Soprano, Bracco says with a big smile, "I know Lorraine Bracco did. I don't know about Dr. Melfi."

The role of a therapist, Bracco notes, was "a great departure for me as an actor, a much more difficult role for me to play. And I loved the fact that they had a really, really intimate relationship."

She points out that fans of the show often ask her why there is so much tension in her office between Tony Soprano and her character. Bracco explains, "I've always felt that it wasn't really a sexual tension. It was the fact that she is so much smarter than him. I believe that. He is very seduced by her. Clearly seduced by her knowledge and by her power. He does not dominate in this room where it really is a ping-pong game."

Outside of "The Sopranos," Bracco has recently worked on stage doing "The Graduate."

She notes, "I did it on Broadway and I did it in Boston, Chicago. I had a great time. I loved it."

Some Facts About Lorraine Bracco