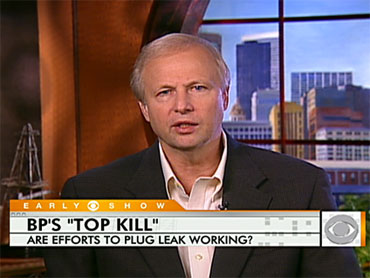 BP managing director Bob Dudley talked to "Early Show" anchor Harry Smith about the so-called "top kill" procedure that BP started Wednesday afternoon. Drilling mud is being pumped into the well through the well's kill and choke valves. The mud must come into the well with enough pressure to stop the flow of oil. Smith asked Dudley if the procedure is working.

"We said the operation would take between half a day and two days," said Dudley. "It continues going according to plan. It's like arm-wrestling between two equally strong people, the well and our operations."

Live video of the well Thursday morning looked as if more oil and possibly other substances flowed from the well than before BP started the top kill, said Smith.

"What you're seeing there is the heavy muds that have been pumped in to the well," said Dudley. "It's a water-based, nontoxic fluid. It balloons out a lot faster. So it's hard to tell."

BP Took "Shortcuts" with Oil Well, Witnesses Say
Can BP Be Trusted in Light of Past Violations?

Dudley denied that there was any wrongdoing on BP's part. "Normally on a well there's the normal pressure and tension of deadlines," he said. "Contractors don't have the deadlines. They're on a day-rate basis. There's this normal operating deadlines that occur on the rig. There's no indication that there's anything different than about this well."

When pressed on whether BP took shortcuts that resulted in the explosion, Dudley said, "Once we're into an operation, there's nothing more important than the safety of an oil well. The guys work and live out there, and they're not going to do that to put themselves or the other people at risk."

Finally Dudley said that if the top kill doesn't work, BP does have a Plan B. "All along the seabed out and around the well, we placed equipment to be ready to be put in place very quickly with a second containment dome over the top of the well," he said. "We would come in, cut parts of the top off and put it over the top [of the well]. That's the next step if this top kill doesn't work. That would allow us to contain and measure the rates of the well."

More on the oil spill in the Gulf

Argument Aboard Oil Rig
"How It's Gonna Be"