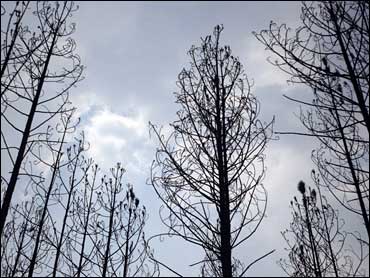 Two boys were arrested and charged with starting fires in drought-stricken south Georgia, which has been battling widespread wildfires for weeks, officials announced Thursday.

The boys are only charged in connection with two of the smaller blazes. The much larger, main fires, are not being called arson, reports CBS News' Sharon Mittelman. They were starting by a tree falling on a power line in one case, and lightning in another, all related to the dry conditions.

One of the arrests was made after bloodhounds found a footprint left at a fire scene, according to the Georgia Forestry Commission's arson investigation task force.

The dogs "trailed someone back to an area where juveniles typically hang out," Georgia Forestry Commission spokesman Darryl Jones said. "We interviewed another juvenile that also was there, and he confessed to starting that fire."

Both are being charged as juveniles and have been released to their parents, authorities said.

"These fires were all very small and were knocked out quickly by the fire departments," Georgia Insurance and Fire Safety Commissioner John Oxendine said Thursday. "But with conditions as dry as they are, they could've become very major."

The fires were unrelated, and authorities don't believe they are connected to six larger fires being investigated as suspicious by the Georgia Forestry Commission's arson investigation task force, said Jones.

Jones said both boys admitted setting the fires when investigators questioned them.

"Typically with juveniles, you keep asking them, 'Why did you do this?' and they don't give you a clear answer," Jones said. "They just keep saying, 'I don't know.'"

The largest wildfire — which has scorched 107,360 acres of forest and Okefenokee Swamp in Ware and Charlton Counties — started April 16 when a tree fell onto a power line near Waycross.

Another large fire was started by a lightning strike in the swamp last weekend and has burned 68,650 acres.