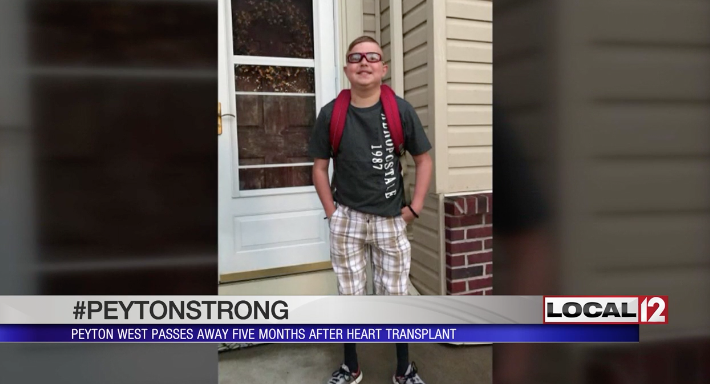 A 13-year-old Ohio boy who received a new heart in March collapsed and died as he arrived for his first day of school last Thursday, CBS affiliate WKRC reports.

Peyton West was born with a heart defect called hypoplastic left heart heart syndrome and had seemed to recover well from the transplant surgery.

Peyton arrived at school with his older brother Thursday morning. When he got out of his brother's car he collapsed.

"We don't know why. We don't understand it but we know God has a purpose and Peyton touched so many lives in just his short time here," said Corey West, Peyton's father.

Peyton's dad had taken a picture of him with his backpack just 15 minutes before he collapsed. He said his son was excited to return to school and skipped an FC Cincinnati soccer game Wednesday night so he could attend an open house at Goshen Middle School.

"He went to bed, no problems. He woke up, no problems being his goofy self," Corey West said.

He said Peyton was not showing signs of rejection. Over the Memorial Day holiday weekend, the family of Peyton's donor, Derek Cisneros, traveled to Cincinnati from Iowa to meet him and his family.

"To thank them and we feel bad for them for losing Derek," Peyton said that day.

Peyton's younger brother, Nolan, who shared a room with his Peyton, said he misses his brother.

"I just wish that he was still alive so we could play and I don't know if I can sleep by myself," Nolan said.

Thursday night, classmates and members of the community gathered at the football field in Goshen, Ohio, to pray for Peyton's family. Some people wore t-shirts marked #PeytonStrong. Counselors were made available to students.

"Peyton was a wonderful young man a courageous young man who always had a big smile on his face. Certainly his battle and his challenges are well-known to our community," said Darrell Edwards, the district's superintendent.

The community's support has been a big help to the West family. Peyton touched many people, and his father said his life can serve as a lesson to others.

"That's what people would want people to know is to love people and to love God and to be there for one another," Corey West said. "Just thank you for praying and for being there for Peyton and our family."

An autopsy will be performed to determine what went wrong with Peyton's heart. His family hopes the results will help other children.

Funeral services for Peyton will be held on Wednesday.