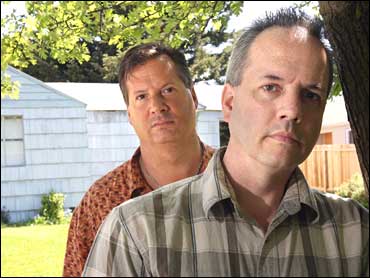 Like many other boys who grew up in the Pacific Northwest in the early 1980s, Tom and Matt Stewart shared a rugged childhood of hikes, campouts and fishing trips, most of it thanks to the Boy Scouts of America.

It was a program that kept the brothers involved in their Federal Way troop all the way to Eagle Scout. Years later, Tom became a Scoutmaster for his own sons.

But as they became adults and moved a thousand miles apart, each privately struggled with memories of Scouting that neither wanted to talk about: the sexual abuse they suffered at the hands of their Scoutmaster, Bruce Phelps.

Matt Stewart would grow queasy at the sight of young Scouts in uniform. Tom Stewart suffered nightmares of fighting off Phelps' advances.

Finally, after decades of silence, the Stewart brothers grew convinced they weren't alone. In 2003, they sued the Boy Scouts and their former Scoutmaster and won an out-of-court settlement.

Four years later, the case has become a landmark in the 97-year history of the Boy Scouts, and the brothers spokesmen for a much larger issue. For the first time, the Boy Scouts of America has been forced to turn over, to the Stewarts' attorneys, its entire archive on sexually abusive Scout leaders.

The previously private records show the Boy Scouts have ejected at least 5,100 adult leaders nationwide for sexual abuse allegations since 1946. And the files reveal that despite efforts to keep potential abusers from joining, the problems persist: In the past 15 years alone, the organization has kicked out leaders for such allegations at a rate of once every other day.

The 45 boxes of files are not public because of a strict court order that prohibits the Stewarts and their lawyers from disclosing specific cases. But a statistical summary of the files, provided by the Stewarts' attorneys, shows the problem is larger than previously known.

Boy Scouts officials won't talk about the cases, but point out that ejected volunteers represent a small fraction of the 1.2 million adults who participate in Scouting every year. They also stress that they now have rules, including background checks and training, that didn't exist when Phelps was abusing Scouts.

But the Stewart brothers, now in their 40s, still grapple with the damage done by a single Scoutmaster. Phelps declined to be interviewed, but he has admitted abusing the brothers and two other boys in sworn testimony.

"The Boy Scouts is very unique because there is a very dangerous bond between Scout and Scoutmaster," explained Tom Stewart, now a 44-year-old Boeing engineer who lives near Enumclaw. "You are out in the middle of nowhere on an outing, and the Scoutmaster is God."

"I was constantly scared"

About five years ago, Matt Stewart was sitting on a beach in California, reading a newspaper story about sex abuse by Catholic priests, when he felt a chill of recognition. He saw the victims' trauma in his own life: work problems, a pattern of failed relationships, a deep distrust of authority.

"I knew that I had lost my youth," said Stewart, now a 42-year-old pharmaceutical salesman who lives in Palm Desert, Calif. "But I never knew why until then."

He called his brother Tom with the epiphany. Over the next few months, their pain congealed into anger. "We both had blocked out a lot of what happened to us," said Tom Stewart.

Their mother had urged them to join the Boy Scouts and had introduced them to Phelps, a teenage Eagle Scout who lived down the street and had his own Jeep.

Their parents let them spend entire weekends at Phelps' house on the pretext of working on merit badges, even after Phelps had grown up and moved to West Seattle, where he led another Scout troop.

"He would say, 'OK, that knot looks fine; you got your merit badge — now let's have sex,'" said Matt.

The Stewarts say they stayed quiet about the abuse because Phelps threatened to shoot their parents — or himself. They say they believed him because he often carried a revolver. "I was constantly scared," said Matt Stewart.

Phelps denied making the threats in a deposition for the Stewarts' lawsuit.

Matt Stewart didn't break his silence until age 25, in late 1989, when he called Seattle police.

According to a police report, Phelps admitted to a detective that he had abused the Stewarts and two other boys. The detective wrote that he called the regional Scouting office, the Chief Seattle Council, but no one returned the call.

Despite Phelps' confession, the case was closed without charges being filed because the statute of limitations had expired, the detective wrote. Phelps has never been convicted of a crime.

But the detective included this note about Phelps: "He never once, during our conversation, stated or indicated he had lost his attraction for younger males."

Phelps' name wasn't added to the Boy Scouts' secret "Ineligible Volunteers Files" until the Stewarts sued in 2003. The organization would later say the lawsuit was the first time anyone had complained about him.

And there have been complaints about thousands of other Scout leaders in the U.S. In fact, since its founding in 1910, the Boy Scouts of America has kept files on volunteers it considers "unfit," including sexual abusers, criminals and even homosexuals. The organization has periodically purged the files, according to depositions in other cases.

Gregg Shields, a spokesman for the national Boy Scouts office in Irving, Texas, said the files are intended to prevent ejected Scout leaders from bouncing to new leadership roles among the 300 councils nationwide. "It is merely a suspicion or belief — a question of fitness of an individual in the Boy Scouts," he said. "We are a private organization and we can extend leadership positions to whomever we see fit."

The organization aggressively guards the contents of the files, but has been forced to turn over portions of them a handful of times. To get the full set, the Stewarts' attorneys fought the Boy Scouts up to the Washington Supreme Court.

In the early 1990s, California attorney Michael Rothschild, who had represented a boy in a sex-abuse suit against the Scouts, obtained two decades' worth of the files. He handed them over to a journalist, Patrick Boyle, whose book, "Scout's Honor," is an extensive history of sex abuse in Scouting.

"You can look at those files two ways," Rothschild said. "They were making a conscientious effort to identify offenders, and the Boy Scouts of America could be commended for that. Or in my case, there was a lack of awareness or sophistication about warning signs about people that may be a danger."

The secrecy of the files has also meant that the Boy Scouts have kept them from their own sex-abuse advisers, a group of respected experts first convened in the late 1980s to help craft a youth-protection program.

During the past 15 years, the group repeatedly suggested that the Boy Scouts study the files to see whether their prevention measures were working, said one adviser, David Finkelhor, who heads the Crimes Against Children Research Center at the University of New Hampshire. But the Scouts' lawyers rebuffed the recommendation, Finkelhor said.

Because of that resistance, it's impossible to know whether the organization has overcome the "reputation or mythology" that has developed about sexual abuse in Scouting, Finkelhor said. "I really can't tell you about whether there's any validity to it or not — and don't think anyone can."

Tim Kosnoff, a Seattle attorney who, with attorney Mark Honeywell, represented the Stewarts in their suit, called it ridiculous that they had to do the research instead.

"The Boy Scouts sell an image," he said. "If parents even knew there was this kind of statistical record, I believe they wouldn't trust their children with the Scouts."

Phelps is now a balding, 54-year-old Seattle City Light employee who lives in West Seattle. After holding leadership posts in three troops in the Puget Sound area, most recently Troop 288 in West Seattle, he reported in testimony that he quit the Boy Scouts in the mid-1980s.

Phelps has repeatedly declined interview requests both by phone and through his attorney.

In a deposition in 2005, Phelps said he last molested someone — also a Boy Scout — around 1985. But he testified that he stopped abusing boys after he converted to Christianity and got married.

In that deposition, he said the Boy Scouts had never asked whether he had committed abuse.

To settle the lawsuit with the Stewarts, Phelps gave them the deed to the house in West Seattle where much of the abuse occurred. The Stewarts quickly sold it.

He also wrote a letter to the Stewarts' attorneys that details ways that Scoutmasters could exploit lax oversight by Scout officials and trusting parents.

Since the time of the Stewarts' abuse, the Boy Scouts of America has installed a so-called "two-deep" rule, which bars adult leaders from being alone with youth. And it has issued youth-oriented training materials, which win plaudits from child-abuse experts.

Even so, "they've probably done more than any other general youth-serving organization to address this issue," said John Patterson, a consultant for Nonprofit Risk Management and an adviser to the Boy Scouts.

In 2003, after the Stewarts and one of their lawyers held a news conference announcing the suit against the Scouts, four other men came forward to accuse Phelps and one other Scoutmaster.

Tom Stewart became an adult leader in Scouting about 10 years ago, when his sons joined. He says he still believes in the organization's core mission of developing young men for adulthood. But he also says he might have been trying to "right some wrongs" by coming back to the Boy Scouts.

"I know there are thousands and thousands of men nationwide who've been abused in the Boy Scouts who are suffering in silence," he now says. "Everything in your life is tainted by being abused as a boy."

With that weighing on his mind, he made a decision.

In the fall of 2003, just before he and his brother filed their suit, he stood up at his troop's meeting in Enumclaw. He was wearing his Scoutmaster uniform.

"I cannot be a leader in an organization that does not protect boys," he told his Scouts.

Then he walked out the door.
By Jonathan Martin, The Seattle Times