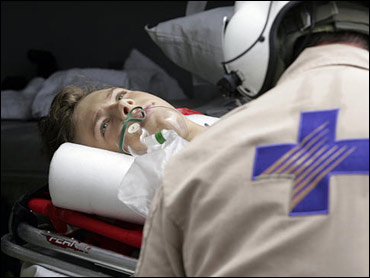 A teenage boy fishing in waist-deep water Monday was bitten and critically injured in the second shark attack in three days along the Florida Panhandle.

Craig A. Hutto, 16, of Lebanon, Tenn., was taken to Bay Medical Center in Panama City, where his leg was amputated. He was listed in critical condition but was expected to recover, said hospital spokeswoman Christa Hild.

The boy was attacked off Cape San Blas, a popular vacation destination about 80 miles southeast of the Destin area, where 14-year-old Jamie Marie Daigle of Gonzales, La., was killed by a shark on Saturday.

The boy was fishing with two friends when the shark bit him in the right thigh, nearly severing his leg, said Gulf County Sheriff's Capt. Bobby Plair.

The three then tried to wrestle the shark off the boy, hitting it in the nose several times. The teen was pulled ashore by his friends, and a doctor who happened to be nearby began treatment before the boy was taken to the hospital, Plair said.

"It got the main arteries in the right leg," Plair said, adding that the boy lost a large amount of blood.

Gulf County has no lifeguards on any of its beaches, Plair said.

But as CBS News Correspondent Mark Strassmann reports, even two shark attacks in three days didn't keep thousands away from the sun and surf

"I'm staying in,'' said one woman in the water, "But I'm not going any further than this.

Shark expert Robert Huerter told Strassmann the attacks are a reminder of the hazards of the ocean.

"The ocean is a wild environment. It's not a swimming pool. And there are sometimes dangerous creatures that live there."

On Saturday, Daigle had been swimming on a boogie board with a friend about 100 yards from shore when a shark tore away the flesh on one leg from her hip to her knee.

Erich Ritter of the Shark Attack Institute said the girl was probably attacked by a 6-foot bull shark, based on measurements of the bite wound. He said it was unlikely the same shark was responsible for Monday's attack.

After Saturday's attack, a 20-mile stretch of shore was closed to swimmers, but beaches reopened Sunday with a double staff of sheriff's beach patrol officers. On Monday, off-duty deputies were called in to beef up beach patrols and watch for sharks from the air and the water.

Florida averaged more than 30 shark attacks a year from 2000 to 2003, but there were only 12 attacks off the state's coast last year, according to statistics compiled by the American Elasmobranch Society and the Florida Museum of Natural History.

George Burgess, curator of the International Shark Attack File at the University of Florida, said Sunday that bull sharks are common in the area, are aggressive and can be found in shallow water. He said that of 500 documented attacks in Florida, the fatality rate was 2.4 percent.

"Sharks are one of many hazards that one may encounter when entering the sea," he said. "There is no reason to think that this is the beginning of a trend."

But other experts say those numbers will only go up, as more and more people crowd the beaches and head into the water.