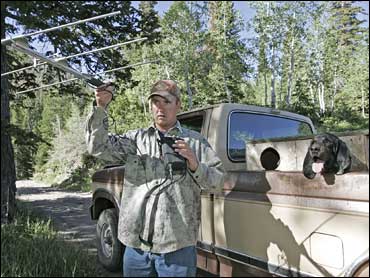 Wildlife officers on Monday fatally wounded a bear they believed was the same animal that snatched an 11-year-old boy from his family's tent and killed the youngster.

The bear had been wounded early in the day and was pursued by hunters aided by a helicopter and 26 tracking dogs. It was described as a male, possibly 300 pounds and "jet black." Authorities were sure it was the right animal because the dogs had tracked its scent from the boy's camp site.

The bear was confirmed dead late Monday morning near the area where the boy was killed, said Lt. Scott White of the Utah Division of Wildlife Resources.

The boy was sleeping alone in one section of the family's large tent late Sunday. He screamed before he was dragged away in his sleeping bag in a canyon about 30 miles southeast of Salt Lake City, said sheriff's Lt. Dennis Harris.

The boy's stepfather heard the scream, and immediately got up and ran out of the tent to try to find out what was going on. But there was no sign of the boy, Harris told CBS station KUTV.

A host from a nearby campground contacted police, who feared the boy had been kidnapped. Deputies blocked off the canyon, checking vehicles.

The boy's body was found about 400 yards from the tent, in the direction of another campsite where a bear sighting had been reported earlier in the weekend, Harris said.

"All he wanted to do was come up and have a good time with his family. And then something like this happens," Harris said. "It's probably the most devastating thing that can happen to a family."

"It's shaken everybody up. We're all distraught," said Scott Root, conservation outreach manager at the Utah wildlife agency. "It could put a lot of fear in the public."

Utah is not known to have any grizzly bears, which have attacked and killed people in the northern Rockies.

American Fork Canyon is a popular camping destination. Harris said the family was camping about two miles up a dirt road from a popular campground.

It was not known what provoked the bear, though bears can smell food for miles.

"They stick their nose in the air. It's like radar," said Hal Black, a biologist at Brigham Young University in Provo.

In July 2006, a black bear bit the arm of a 14-year-old Boy Scout while he slept in a tent, also in Utah County. The female bear returned to the campground and was killed. The boy was not seriously injured.