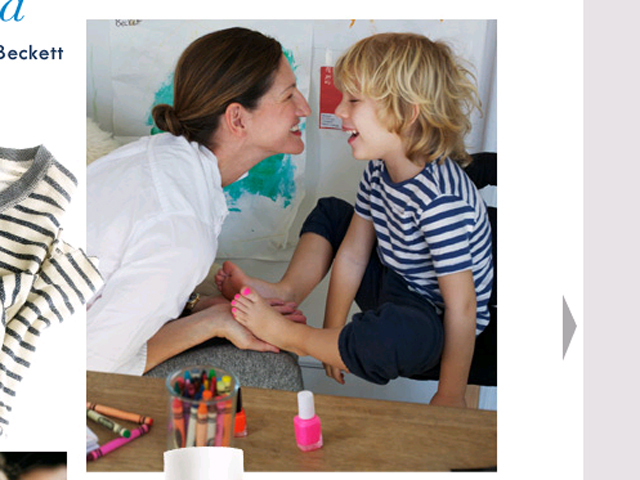 When J. Crew customers opened an email advertising free shipping last week, they were greeted by a photograph within the advertisement featuring one of the company's executives and her son. It was seemingly harmless, but the ad had some people doing a double take. The image consequently set the internet ablaze with opinion.

"Early Show" co-anchor Marysol Castro reported the photo is the picture of innocence - a mother and son sharing a laugh at home. But if you take a closer look, you'll see in mom's hands rest the little boy's feet, his toes painted a shade of hot pink.

The photo, part of a recent online ad campaign for J. Crew, shows the company's creative director Jenna Lyons with her son Beckett. The accompanying caption reads: "Lucky for me I ended up with a boy whose favorite color is pink. Toenail painting is way more fun in neon."

The image quickly went viral and has created a stir on the internet with people weighing in on both sides of the controversy.

According to one parent online, "I like my boys. I don't want them to be girls! ... Little boys with pink toes ... it's disgusting, so are their parents."

"The Early Show" showed the photo to a group of parents, and found that while some have reservations, such as one parent who said, "I have a 2-year-old boy and I wouldn't do it if he asked me to," others were more accepting.

One parent said, "I actually do not see anything wrong with this. I think it's adorable."

"The Early Show" contacted J. Crew, but the company declined to give a statement about the photo.

Castrol remarked perhaps the gender lines of this new generation aren't as clear cut as they once were. Six months ago a 5-year-old Seattle boy made headlines after his mother learned he enjoyed traditional girl things, like jewelry, dresses and the color pink. She even wrote a book about him called "My Princess Boy."

Even Hollywood stars are willing to let their children explore: Brad Pitt and Angelina Jolie's daughter Shiloh adopted a wardrobe more suitable for a boy, while Gwen Stefani and Gavin Rossdale's son Kingston has been photographed wearing his own shade of nail polish.

One mom said of the style choices, "Go with it. Have fun. They're kids. They're only going to be children once."

But are these children actually permanently affected by their childhood tendencies?

Psychologist Dr. Susan Bartell and "Early Show" Contributor and parenting expert Shannon Eis discussed this question on "The Early Show," along with what exploring what gender means. Click on the video below for their discussion.