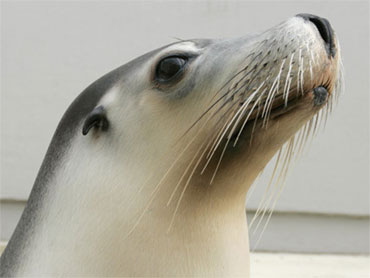 For a while, it seemed like Lexie the Australian Sea Lion had had enough of her gig performing at Sydney's Taronga Zoo.

Only moments after shaking flippers with Jack Lister, 11, she attacked him.

Poor Jack ended up in the hospital with stomach and back wounds, but don't blame Lexie. As CBS News correspondent Mark Phillips reports, it was likely all a case of mistaken identity.

Lexi thought Jack was a fish.

"The seal sneezed on me and I had fish guts all over me, and I think it smelled the fish and it wanted to eat me," explained Jack from his hospital bed. Jack's wounds were only superficial.

He'd been at the zoo with his step-mother as a pre-back-to-school treat.

"When she said he's been attacked by a seal - yeah, I went into a bit of panic mode," recounted Jack's father, Andrew Lister.

The zoo, which has been promoting what it calls its "seal encounter" attraction, leapt to Lexie's defense.

"The seal involved has been in our care for eight years," said zoo employee Simon Bussy. "We hand-raised her. This is completely out of character."

Still, as a precaution, the seal encounter act has been cancelled for now.

As for Jack, he has a word of advice; "Don't get sneezed on by seals."

A lesson for all of us.

When Small Appliances Are Fire Hazards