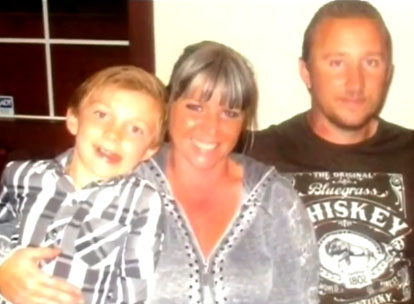 PLACERVILLE, Calif. -- A 16-year-old boy has been charged with killing his father, the father's fiancé and their 7-year-old son, whose burned bodies were found in their rural Northern California cabin.

Nolan Buchanan was arrested at his high school in Benicia on Thursday, El Dorado County Sheriff John D'Agostini said at a news conference. He was charged as an adult with three counts of murder, District Attorney Vern Pierson said.

Authorities found the bodies in the aftermath of a Sept. 13 fire at the family's cabin in Greenwood, about 50 miles northeast of Sacramento.

The remains were identified as Adam Buchanan, 38, hisfiancé Molly McAfee, 37, and their son Gavin.

Nolan Buchanan told investigators the three took a trip to the cabin and he had chosen not to go, D'Agostini said.

After finding the blaze suspicious, deputies searched the Buchanan home and Adam Buchanan's office in Benicia, a San Francisco Bay Area city about 100 miles away, seizing records, computers and a pickup truck.

The search turned up Adam Buchanan's wallet and ID, McAfee's purse, a gun, ammunition and other evidence that led to the arrest of Nolan Buchanan, D'Agostini said.

The teen was expected to appear in court Friday or Monday, Pierson said. It wasn't clear whether he had an attorney yet who could comment on his case.

The sheriff said such grisly cases are not unheard of in his mostly rural county, but they are rare.