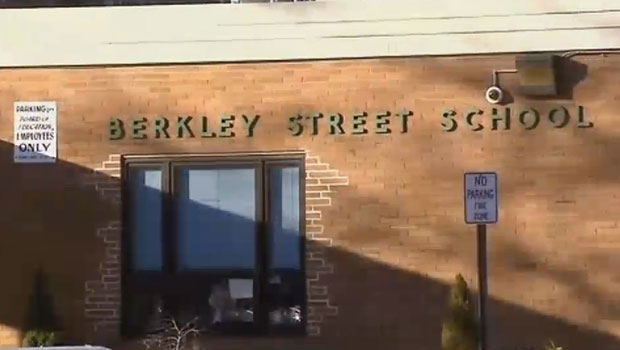 NEW MILFORD, N.J. - A folding table attached to a wall collapsed at a school during a recreational soccer practice, killing a 7-year-old boy preparing for his season opener, officials said.

The table fell open and the child was struck by a bench, Detective Lt. Frank Ramaci said in a news release. It's not yet known whether the boy touched the table.

"We know he was standing by the bench that was affixed to the wall, but we don't know whether he was touching it before it came down," he told CBS New York. "The investigation is still pending as far as that is concerned."

Jordan, a student at Gibbs Elementary School on the north end of town, was taken to Hackensack University Medical Center where he died at 7:30 p.m.

School Superintendent Michael Polizzi told The Record newspaper that the table folds vertically into the wall and has benches attached to both sides. It is secured with a key.

Polizzi said he didn't know if it had been properly locked. "It's a tremendous loss for all of us, a shock for the family especially," he told CBS New York. "I can't imagine the void the family will feel."

He said the tables have been in "good working condition," and the school has never had a problem with them since they were installed about 11 years ago.

The U.S. Consumer Product Safety Commission warned in 2012 of the potential safety risk of the tables, saying it had received reports of several deaths and injuries in schools when the tables tipped over. It warned that most accidents happened during afterschool or during nonschool activities and warned schools to not allow children to move the tables or play with them.

"It's a tremendous loss for all of us, a shock for the family especially," Polizzi said. "I can't imagine the void the family will feel.

John Bigger, the recreation director for New Milford, told The Record that the boy was a member of the borough's indoor soccer team and was with a group of six 7- and 8-year-old children practicing for their Sunday opener. He said practices in the gym were suspended for a few days while it is inspected, and he doesn't know if the team will play Sunday.

Grief counselors were made available at both schools.