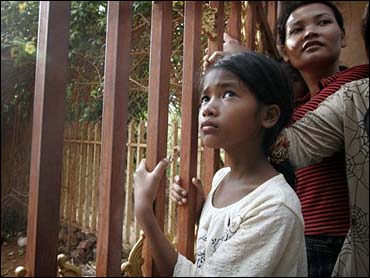 Masked gunmen seized dozens of children at an international school in northwestern Cambodia on Thursday, killing a 3-year-old Canadian boy and threatening to shoot the others one by one before police rescued the hostages, authorities said.

The attackers shot the boy when authorities refused to meet all of their demands, then "threatened to kill the other children one by one," said Information Minister Khieu Kanharith.

Authorities said they managed to talk the hostage takers out of the building after giving them a minivan and $30,000 in cash. When the men got into the vehicle with four children, security forces closed the gate to the school compound and launched an assault, yanking the men from the van.

Nearly 40 children, some as young as 2, rushed past the school gate and into the arms of their panic-stricken parents.

"I'm very relieved," said Singaporean Tan Seok Ho, who hurried to the school when she heard about the crisis from a friend. Her youngest child Levon was among those taken and released unharmed. "I'm happy to have him back in my arms again."

The crisis unfolded at Cambodia's tourism hub of Siem Reap, near its famed Angkor temples and home to many expatriates, and quickly drew concern from governments around the region. The town has many establishments serving the international tourist trade, and children from at least 15 nations attend the school.

Hundreds of people gathered outside the yellow school house during the tense situation, and three armored personnel carriers were parked on the road.

The identity of the attackers was not clear, even after the standoff ended. Prime Minister Hun Sen said they appeared to be security guards at the school, but police later said teachers did not recognize them.

The men originally took about 70 people but later released 30 of them, Khieu Kanharith said.

He later said $30,000 and a van were given to the gunmen, but they still refused to free the hostages and continued to demand guns and grenades.

Then gunshots from inside the building rang out.

A scene of chaos ensued after the police siege.

Prak Chanthoeun, the military commander, said some of the parents grabbed three of the hostage takers from police and began beating and kicking them. "We could barely control the angry crowd," he said.

"It's a bad ending for sure," said Denis Richer, a Frenchman who teaches at another school in Siem Reap, after trying to comfort the father of the young boy who died. "He was completely lost, he asked me to look for his wife which I did. I found an ambulance to bring the couple to the clinic."

Police initially said there were six attackers, but later put the number at four. They said the hostage takers were 22 to 25 years old, and were from the southeastern province of Kandal. Witnesses said one of the attackers lay wounded on the ground after the siege had ended.

A Western resident in Siem Reap, who demanded anonymity, said she was told by a teacher at the school that the children, most of them aged 2 to 6, came from Cambodia, Italy, Indonesia, South Korea, United States, Japan, Ireland, Singapore, Great Britain, Australia, Canada, Philippines, Taiwan, Thailand and Switzerland.

Khieu Kanharith described the boy who was shot as a 3-year-old Canadian. Embassy officials could not immediately confirm that, but a witness who knew the child also identified him as Canadian.