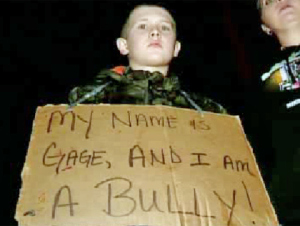 NEW CASTLE, Pa. - When Gage Duncan, a 12-year-old Pennsylvania boy, was suspended from school for bullying younger students, his parents took matters into her their own hands.

According to CBS Pittsburgh, they made him stand on a street corner with a cardboard sign hung around his neck reading, "My name is Gage, and I am a bully."

Amber Carey, the 12-year-old's mother, says she hopes her son learns a lesson because she doesn't want him to be labeled as a bully.

“This is my way of teaching him that bullying is not acceptable,” Carey said. “It’s not right to pick on somebody else. He embarrassed them, so this is his embarrassment for himself.”

The boy’s mother and stepfather sat in their parked truck close-by while Gage, who is in the sixth grade at George Washington Intermediate School in New Castle, stood outside with his sign.

“I think I’m not going to do it again. I’m going to apologize to the principal, and to the children I did it to," Gage told the station.

“I’m trying to instill morals and respect more or less in him by doing this because bullying is an unjust thing,” Carey added.