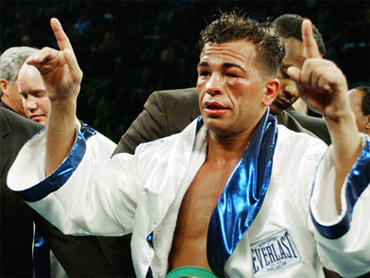 (AP Photo/Mary Godleski)
RIO DE JANEIRO (AP) A Brazilian police investigation has determined that the death of boxer Arturo Gatti was a suicide and a court has ordered the release of his wife, who was once suspected of killing him.

Lead investigator Paulo Alberes told The Associated Press on Thursday that police concluded Gatti killed himself on July 11 in a seaside resort in northeastern Brazil.

A day after Gatti was found dead, police said they thought his 23-year-old Brazilian wife, Amanda Rodrigues, had strangled him with her purse strap while he slept.

But police began to back off after a coroner's report said that Gatti may have killed himself.

Gatti was found dead in the apartment he was renting with Rodrigues in the seaside resort of Porto de Galinhas in Brazil's northeast.

The pair, who had a tumultuous marriage, had arrived there a few days before Gatti's death for a second honeymoon. The couple brought their 10-month-old son, who was unhurt and is in the care of Rodrigues' family in Brazil.