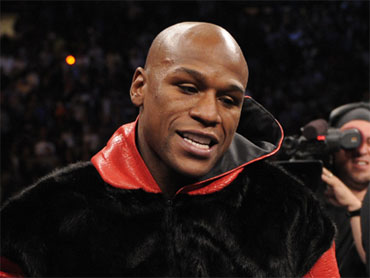 Boxer Floyd Mayweather Jr. has been freed from a jail in Las Vegas after posting bail on a felony theft charge stemming from a domestic violence complaint by his ex-girlfriend.

The 33-year-old Mayweather said nothing as he left the Clark County jail Friday after surrendering for booking on a grand larceny charge. Bail was $3,000.

Mayweather's lawyer, Richard Wright, says the charge stems from an allegation that Mayweather took an iPhone from Josie Harris, his ex-girlfriend and mother of three of his children.

Harris made a police complaint and sought a protection order Thursday from a Family Court judge.

She claims Mayweather hit her during a confrontation at her home in Las Vegas.

Harris alleges Mayweather pulled her hair, punched her in the head and twisted her arm while she screamed for their children, ranging in age from 7 to almost 11, to call 911.

Police said Thursday that Harris was treated at a Las Vegas hospital for minor injuries.

"Please order Floyd Mayweather to not try and contact me," Harris wrote in an application for a protection order that said the couple separated in May after living together for seven years.

"Floyd has threatened to have other people do harm to me as well and if (there) is a way I can be protected from that please help me," the document says.

Mayweather is undefeated as a professional fighter and is considered one of the sport's top performers, with a record of 41-0 and 25 knockouts. He goes by the nickname "Money" and earned more than $20 million in May from his fight in Las Vegas against "Sugar" Shane Mosley.

Mayweather has also been arrested several times over the years on battery and assault allegations.

He was acquitted by a Nevada jury in July 2005 after being accused of hitting and kicking Harris during an argument outside a Las Vegas nightclub.

Harris, then 25, recanted her allegations and testified that she lied to police because she was angry Mayweather left her for another woman.