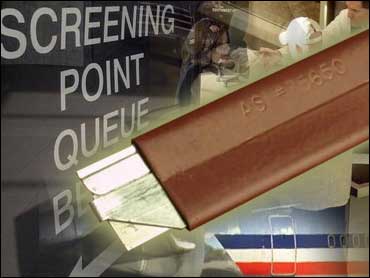 A manual written by the airline industry years before the Sept. 11 attacks instructed airport screeners to confiscate from passengers boxcutters like those used by the hijackers, documents show.

Though the federal government did not specifically bar the objects before Sept. 11, the airlines were in charge of security and the manual they compiled was the guidebook for determining what items could be brought aboard flights.

The instructions were part of the Checkpoint Operations Guide, a manual issued by the Air Transport Association, which represents the major airlines, and the Regional Airline Association, the trade group for smaller carriers. The groups issued the guide to carry out Federal Aviation Administration regulations.

A copy of the 1994 manual was obtained by The Associated Press.

ATA spokesman Michael Wascom would say only: "Boxcutters were not prohibited by the FAA on 9-11-01." Officials of the regional airlines group declined comment.

Former FAA chief counsel Kenneth Quinn, now a lawyer representing several security companies, said the agency, not the industry, was responsible for keeping boxcutters off planes. "There's only one way to prohibit items from being carried on board airplanes, and that is through mandatory security directives from the FAA," Quinn said.

Before the terrorist attacks, the industry was responsible for security, under FAA oversight. The $15 billion airline aid bill enacted shortly after Sept. 11 limited the airlines' liability to the amount of their insurance coverage. The House Republican version of legislation creating a Homeland Security Department would give the same liability limits to screening companies.

The fact that a boxcutter got aboard an airplane isn't going to guarantee victory in a lawsuit, said Dean Headley, associate professor of marketing at Wichita State University and co-author of an annual study on airline quality.

"I just don't think there is going to be a lot of lawsuits won or lost on that particular item," Headley said. "Other things that were equally or more potentially lethal were allowable and certainly not excluded."

The manual for security screeners was issued by the airlines' trade groups to comply with FAA regulations and was in effect at the time of the terror attacks. The document lists boxcutters and pepper spray as items not allowed past security checkpoints. Screeners were told to call supervisors if they found either item.

Attorney General John Ashcroft said some of the hijackers used boxcutters to take over the planes, and the indictment of alleged hijacking coconspirator Zacarias Moussaoui charged that Mohammed Atta, the leader of the hijackers, had pepper spray.

"We actually had rules and regulations to stop this," said former Transportation Department Inspector General Mary Schiavo, now a lawyer suing United Airlines and American Airlines on behalf of families of Sept. 11 victims.

Paul Hudson, head of the Aviation Consumer Action Project, an advocacy group, said this latest revelation is another reason for an independent commission to investigate Sept. 11.

"The congressional committees, while they did investigate intelligence and law enforcement, really haven't touched on airline security, as was operated by the airlines and regulated by the FAA," said Hudson, who lost his daughter in the 1988 bombing of Pan Am Flight 103.