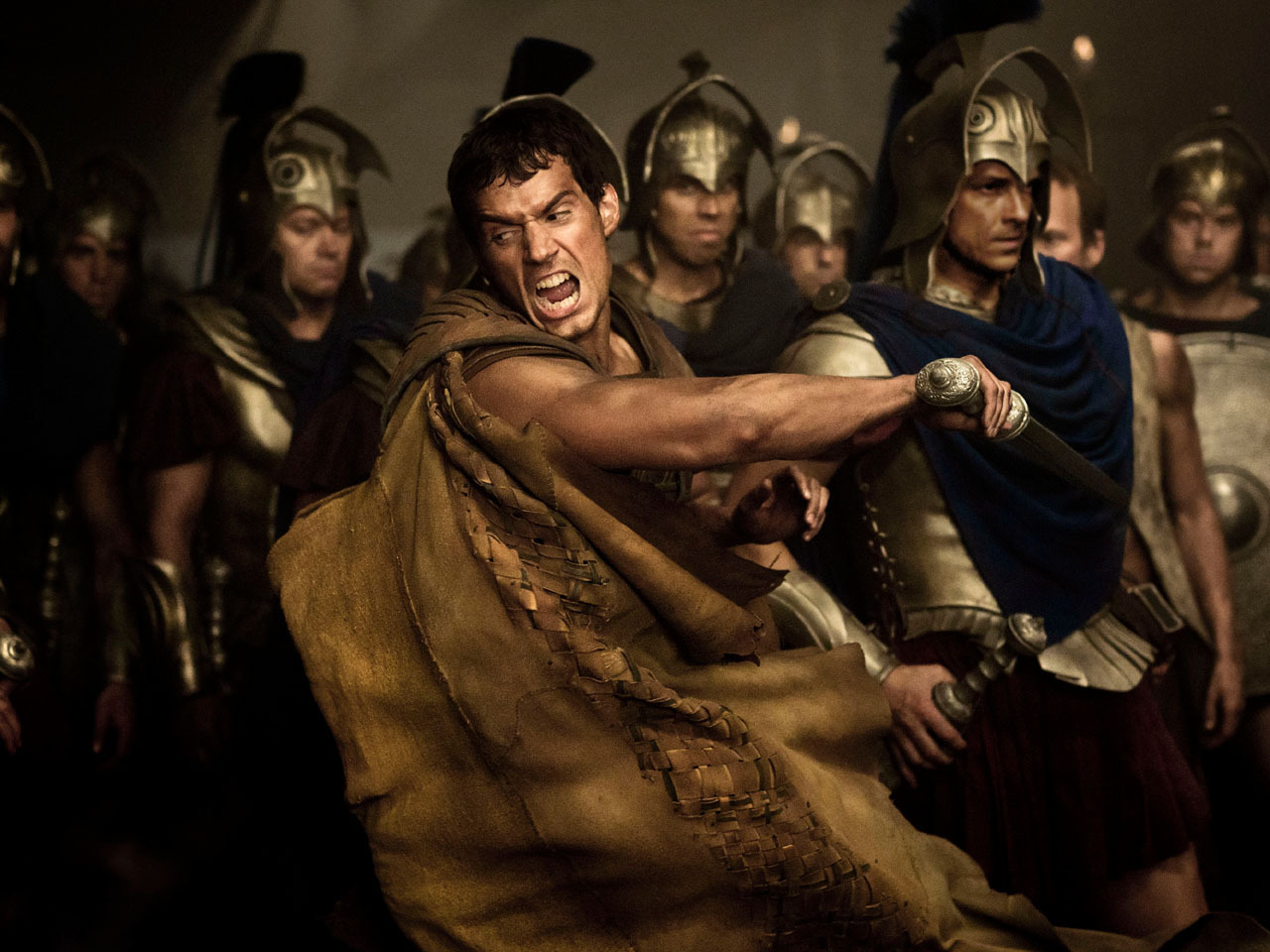 LOS ANGELES -- The gods of ancient Greece have extended their rule to the weekend box office with a No. 1 debut for the action tale "Immortals."

The story of Greek hero Theseus took in $32 million domestically, while Adam Sandler's comedy "Jack and Jill" opened at No. 2 with $26 million, according to studio estimates Sunday.

The new movies bumped the animated hit "Puss in Boots" to the No. 3 spot after two weekends at the top. "Puss in Boots" earned $25.5 million, raising its domestic total to $108.8 million.

Released by Relativity Media, "Immortals" stars Henry Cavill and Freida Pinto in a tale of human heroes battling an evil king (Mickey Rourke) who aims to bring down the Olympian gods.

With males making up 60 percent of its audience, "Immortals" has a chance to corner much of the action market through late November and beyond, a period likely to be dominated by family movies such as "Happy Feet 2," "The Muppets," "Hugo" and "Arthur Christmas."

"There's really not another action movie until you approach the Christmas holidays," said Kyle Davies, head of distribution for Relativity. "Over the next few weeks, there's no real competition for us."

Sandler plays dual roles in "Jack and Jill," as a sturdy family man and his needy sister, who comes to visit for Thanksgiving.

"Jack and Jill" got off to a solid start but came in on the low end for Sandler, whose comedies typically open in the $30 million to $40 million range. Still, it continues Sandler's virtually unbroken string of strong openings for his broad comedies dating back to the late 1990s.

"A big part of his success is just that sort of Everyman appeal he has, whether it be the guys going out to have a beer or girls thinking he's just as charming as all hell," said Rory Bruer, head of distribution for Sony, which released "Jack and Jill."

"J. Edgar" played in 1,910 theaters, compared with more than 3,000 for the rest of the top-five movies. It was the weekend's grown-up choice, with 66 percent of viewers over age 50, according to distributor Warner Bros.

Like "Immortals" with action crowds, "J. Edgar" has the prospect to dominate among older viewers through Thanksgiving weekend (Nov. 24-27), one of the busiest times of the year for movie theaters.

"We're the adult choice," said Dan Fellman, head of distribution for Warner. "We feel we have really good play time ahead of us going into the holiday."

"J. Edgar" will join a parade of potential Academy Awards contenders arriving before year's end as Hollywood rolls into its most diverse season, when drama, comedy, action and family films share screen time.

"This was one of the first weekends we've seen in a while that had a nice combination of films that gave us a really solid weekend," said Paul Dergarabedian, an analyst for box-office tracker Hollywood.com. "To me, this is what the holiday season is all about, having films like `Immortals' in the mix in the top-five with a drama like `J. Edgar."'

The variety clicked with audiences this weekend. Overall revenues came in at $137 million, up 13 percent from the same weekend last year, when "Megamind" led with $29.1 million, according to Hollywood.com.